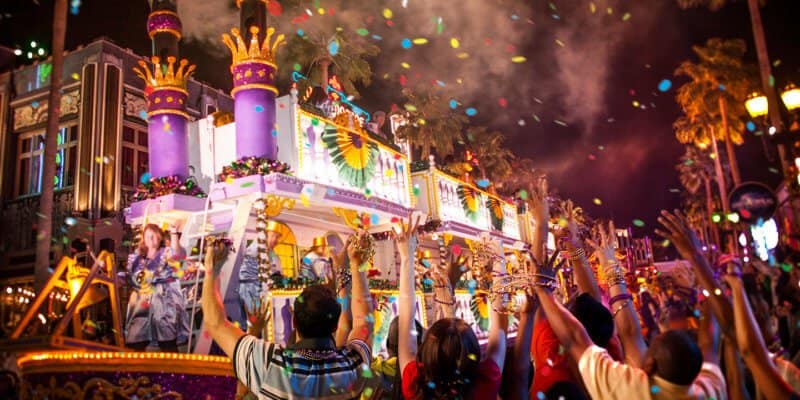 Universal Orlando Resort has successfully pulled off many of its special events amid the ongoing pandemic. Most recently, Universal enjoyed a special Christmas event over the 2020 holiday season. While much of the event had to be changed from what they did previous years as a result of the coronavirus pandemic, it was still an enjoyable event!

This raises one question, what could Universal’s Mardi Gras event look like in 2021?

Currently Universal has no information for the Mardi Gras celebration in 2021 on their website.

But, we know from previous years that the event typically contains lots of food an over-the-top parade, and plenty of live music. These all become more difficult to achieve amid the ongoing pandemic. So, how could Universal overcome these new challenges to pull off an exciting Mardi Gras event?

Universal has not officially given any hint as to what could be coming for Mardi Gras this year, but we have some ideas on what the event could look like based on previous events Universal held in 2020.

Of course, you can anticipate face masks and social distancing to still be in-place during the 2021 Mardi Gras event, if, in fact, it is held at Universal’s Florida theme parks. It is likely that food stands will be able to operate.

The parade could see an adjustment as it moves into the same space in which the Christmas walkthrough was held this past holiday season. The walk-through that was held over the holidays at Universal was in a soundstage and featured floats and balloons from Universal Holiday Parade featuring Macy’s. It encouraged photos and social distancing and was a great way to safely enjoy a special holiday treat. We could see Universal implement this again with Mardi Gras. The Mardi Gras parade is the most important part of the celebration at Universal. Perhaps beads could be handed out before you enter the walkthrough!

Related: New Store Coming to CiryWalk is a GIANT Mystery

That is our own speculation though, as again Universal has not officially confirmed any details for the Mardi Gras celebration for 2021.

It is unlikely that Universal will bring in major musical acts to perform during Mardi Gras as this would draw large crowds and be difficult to maintain social distancing among guests. We will simply have to wait and see how Universal addresses this.

So what do you think Mardi Gras will look like in 2021? Let us know your thoughts in the comments!

Comments Off on What Could Mardi Gras at Universal Look Like in 2021?