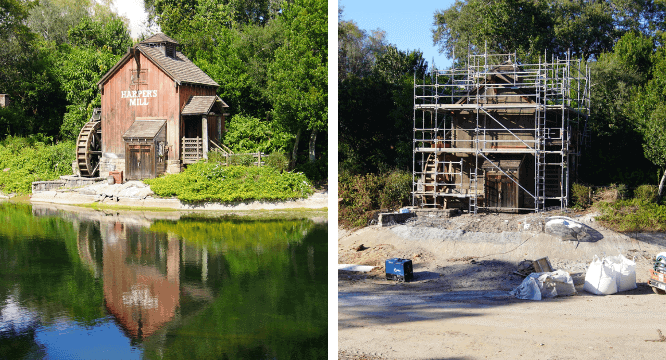 The Rivers of America have seen quite the refurbishment during 2020 and 2021. Drained annually for maintenance, the Rivers of America, which touch Frontierland and Liberty Square, have been in the process of draining and upkeep since November of 2020, during which the waters started to recede and the riverboat track emerged from the waters. The refurbishment of the area continues, with the Tom Sawyer Island Harper’s Mill House being next up for paint and “beautification.”

A short while after the Rivers of America were last year drained, the birds were shooed from the remaining puddles of water in the river as Imagineers came on-site to assess and maintain the riverboat’s track. All the meanwhile, Tom Sawyer Island and it’s offerings were closed. The beautiful riverboat, The Liberty Belle, has been in dry dock during this period waiting for repairs, paint, and any other needs to be paid.

Now, we are seeing work starting on the Mill House that sits on the shore of Tom Sawyer Island, visible from the “mainland” of Liberty Square and Frontierland. Theme park reporter Bioreconstruct (on Twitter @bioreconstruct) has some high-resolution photos of the refurbishments being paid to this scenic building. Here we can see a “before” set of photos of the Mill House both along the waterline as well as when the waters had receded.

Comparison of Harpers Mill at Rivers of America on Oct 25 and Nov 8. Waterway drained for maintenance. pic.twitter.com/3GPcAHU0RW

After looking at Bioreconstruct’s photos of the nearly naked Mill House, it appears that the paint has been stripped from areas like the once-red door and second-story window/door, but the panels on the face of the house and sides look to be new panels of wood. They are so crisp and uniform that it must be new wood paneling in some places.  The scaffolding reaches the peak of the rooftops, so we can surmise this building will get a checkup from head to toe.

A look at refurbishment of Harper’s Mill at Rivers of America. Stripped of all paint. pic.twitter.com/5W6W5Un4Rs

The water wheel of Harper’s Mill House on Tom Sawyer Island looks to be scrubbed of all paint and stain, as evident between the wheel teeth. (Third photo in the compilation).

Some of the details of the wheel at Harper’s Millat Rivers of America. In refurbishment. pic.twitter.com/9BbNjvKo1x

One of the most fun refurbishments we see taking place is actually not on the Mill House at all but on the shore of the River. None of the big boulders are real (or, should we say, most of them are not real)! Created from a skeleton of chicken-like wire, the boulders are formed and staked into the ground and then sculpted. In the photos and tweet below, we get a rare glimpse of the creation of rocks as they are added to the shoreline.

Rock work forms at shore of Harper’s Mills at Rivers of America. pic.twitter.com/f6fiyskUvy

Lastly, we get an “intermediate” view of Harper’s Mill House as the wood is bare without decoration. We hesitate to call it an after photo as we hope the bright ruddy paint is returned to the house, as well as the white lettering reading, “Harper’s Mill House” on the front-facing facade.

Harper’s Mill is in refurbishment at Rivers of America. Stripped of all paint. pic.twitter.com/g4OFhPYwvM

The Walt Disney World calendar estimates these Rivers of America refurbishments to be complete in February of 2021, and we know you are eager to return to exploring the island and riding along in the Liberty Belle.

Leave us a comment about what paint job you think Harper’s Mill House will get!

Click here to book your next Disney World vacation!