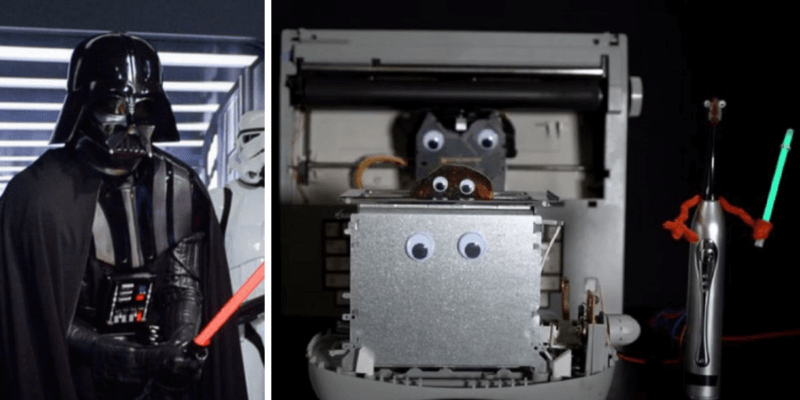 “The Imperial March” can now be played on Alexa… and various household objects! Although much less intimidating than its original version that appeared in the 1980 hit Star Wars film, The Empire Strikes Back, hearing a toaster play the tune is still awesome!

If you plan on have a wildly productive day today, we suggest completing that to-do list done before you watch these videos by YouTuber Device Orchestra. You know once you’ve heard “The Imperial March,” it’s really hard to not start humming or belting it out loud for the rest of the day, and you are about to hear it a few times over. Productivity be gone!

“The Imperial March” of the Toaster

YouTuber Device Orchestra has tried his hand at playing “The Imperial March” with a toaster. Seven years ago was his first attempt with a cell phone in a toaster. He programmed the phone to vibrate against the metal inside a toaster in tune to “The Imperial March.” The 2+ million viewed video was quite successful — and you can tell how dedicated of a Star Wars fan the YouTuber is from the effort put into creating a piece like this.

“The Imperial March” of the Epilator

When John Williams composed “The Imperial March,” I’m sure he had orchestras in mind for the performing of this musical masterpiece — and not the musical stylings of a hair removal tool. Yes, that’s correct! Device Orchestra adjusted and programmed the frequency on an epilator to execute the performance of our beloved Star Wars earworm in 2019.

“The Imperial March” of the Toaster and Crew

The beginning of 2021 is the start of a new journey — even for Device Orchestra. Lucky for us, we’re being blessed with an updated version of the toaster playing “The Imperial March.” He said that he cheated the previous version by placing the vibrating cell phone inside the toaster, and this time, it will be done with toast. After researching how the toaster works, Device Orchestra has elaborated on this original attempt by not only having a toaster as the main star, but added a typewriter, and electric toothbrushes to create a household orchestra. We think George Lucas will approve of this one for sure.

We wouldn’t suggest trying this at home, but it is definitely safe to enjoy Device Orchestra’s work!

Do you think these videos were impressive? How long will you be singing “The Imperial March?”