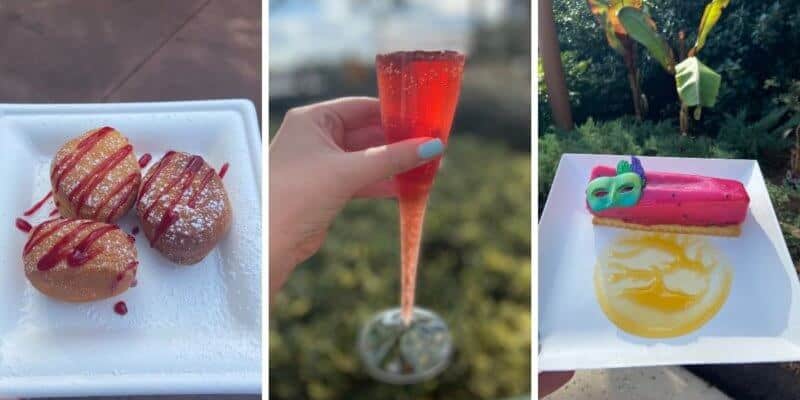 Disney World has brought back one of its most popular festivals at EPCOT — the EPCOT International Festival of the Arts!

However, for 2021, Disney has had to modify its annual festival (which officially debuted on January 8 and will run through February 22) in order to operate safely for Guests and Cast Members, including eliminating some of the experiences of years past as well as bringing some new (and safe) experiences to the table.

Want to book a trip to Walt Disney World? Get started here!

But despite some of the experiences not returning and other experiences being modified, one thing that Guests can look forward to is the Food Studios!

As Disney Parks Blog shared, Guests will be able to “indulge in over 15 Food Studios serving culinary art all around World Showcase”. But with so many choices on the menus, what is worth trying and what should you pass on? Well, I was at the EPCOT Festival of the Arts, and here are my recommendations!

In the Showcase Plaza near Canada, you will find The Refreshment Port which serves Lobster Poutine. I decided to try this dish and it was absolutely delicious.

It consists of French fries topped with lobster, lobster bisque cheese sauce, pickled jalapenos, and citrus cream and I couldn’t get enough. It’s a great bang for your buck because the number of lobster chunks I received was outstanding.

If you are a fan of lobster and French fries, I highly recommend this dish.

As a huge cheesecake fan, I had high expectations going into trying this and it did not disappoint. Rich, creamy cheesecake paired with a crunchy sugar cookie and sweet glazed strawberries, it was the perfect sweet treat. If you like cheesecake this is a MUST try!

One of the most popular booths every single year is the Pop Eats! booth, located in Showcase Plaza near Disney Traders. Here, I decided to try a few different items.

First up was the Grilled Cheese and Tomato Soup. Though the booth ran out of the adorable tin cans for the soup, it still tasted just as good! Warm, flavorful, and perfect on the chilly day I visited EPCOT.

I was expecting the grilled cheese to be just as good (I’m a sucker for a grilled cheese and tomato soup pairing), however, when I took a bit of the sandwich I was slightly disappointed. The bread was hard and the cheese wasn’t melty. I am wondering if this dish was sitting out for a while instead of being made to order, but overall, the tomato soup was worth the dish alone.

Of course, I had to try the famous Pop’t Art cookie, which was designed with blue and orange icing this year. The cookie itself just fell apart in your mouth and was very flavorful. The jelly inside wasn’t overly sweet. In fact it was a bit tart, which was the perfect balance to the sugar cookie and sweet icing. I would definitely get this one again.

As for drinks, I decided to try the Popping Bubbles Cocktail, which was beautiful at first glance. The colorful boba balls were very eye catching. The drink itself was good, but to me, there was nothing extremely special about it — It just tasted like a glass of champagne with the occasional boba bubble popping in your mouth.

The next stop was Italy, where I also decided to try more than one dish — One savory and one sweet.

The L’Aragosta was first on my list, which is a lobster filled ravioli in a vanilla-saffron cream sauce and shredded chili peppers. I do have to warn you, this dish is a bit on the pricey side, however, it was worth every penny. Easily one of my favorite dishes at this year’s festival.

The sweet dish I decided to try at this booth was the Bombolini which, again, did not disappoint. The Italian doughnuts (which were very similar to munchkins) were filled with a delicious Bavarian cream and coated in sugar. They were then finished with a drizzle of raspberry sauce, making the dish come together in the perfect way.

Moving along, I decided to stop at Morocco’s booth next, where I tried one food dish and one beverage. First up was the Mediterranean Flatbread, which I wasn’t a huge fan of. It consisted of zaatar pesto, artichokes, roasted peppers, sundried tomatoes, and fennel cream. Personally, it had too many of the Moroccan spices for my liking, but if you do like these types of flavors, you may enjoy it.

The beverage I tried was the Maeloc Blackberry Hard Cider, which I was a huge fan of — Light, refreshing, not too sweet, I would definitely get this again.

Over between Morocco and France is the Vibrante & Vivido Food Studio, where I tried the stunning and delicious Passion Fruit Mousse. This dessert came with dragon fruit jam, which just tied all of the wonderful flavors together. I recommend getting this dish if you are visiting the festival this year.

Do you want to visit the reimagined Taste of EPCOT International Festival of the Arts in 2021? There’s still time to book a trip! Get started today.

Editor’s Note: The opinions stated in this article do not necessarily reflect those of Inside the Magic overall.

Comments Off on Honest Review: Must-Try Food and Drink Items at EPCOT Festival of the Arts