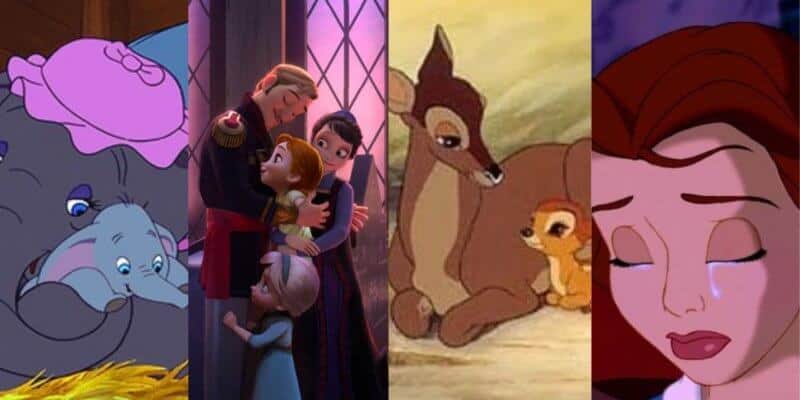 Do you know when you are watching a horror movie and you can see there is a murderer in the house, and suddenly the camera cuts to a character not paying any attention, and right away you know they are about to die? You don’t even need to watch the next 30 seconds to confirm it — it’s just a horror movie trope that happens again and again, and now, is a normalized aspect of a horror movie.

Well, when you turn on Disney+ and pick a Disney film to watch, you can often assume that the main character’s mom is either suffering, dying, or dead — and I want to find out why.

From the Walt Disney Company’s inception, mothers in Disney films have almost always been dead. From Walt Disney’s first feature film in 1937, Snow White and the Seven Dwarfs, Walt Disney Studios have created mother characters who live the anti-fairy tale. What’s interesting about this trend is that even after Walt’s passing, Disney films continue to create mother-less (or parent-less) characters. Also, Pixar Animation Studios (acquired by Disney after it was founded) also falls into the dead mom trope, fitting in perfectly with its parent company, Disney Studios.

That being said, this reporter wants to know why, from 1937 to 2020, does Disney continuously put out films in which characters’ mothers die or are already dead in so many Disney movies.

One major theory fans have is quite sad, and is one that would resonate with Walt Disney deeply. After the major box office success of the Disney princess movie, Snow White and the Seven Dwarfs — which thanks to Guinness World Records we know, “took $184,925,486 (then £37,404,022) at the US box office, equivalent to $1.2 billion (£890 million) as of 2018” — Walt wanted to buy his parents Flora and Elias Disney a home near the Disney Studio in Burbank, California. After Flora complained about the gas furnace, Disney had repairmen sent to the home, but unfortunately, the problem was not resolved. Flora ended up dying of asphyxiation in the home Walt bought for her — which became a tragedy Walt would have to carry with him for the rest of his life.

Many Disney fans theorized that this is why Disney characters always lose their moms — because they themselves are a reflection of Walt and his pain. That being said, there are a few rebuttals to this theory. Flora passed away on November 6, 1938, a year after Snow White and the Seven Dwarfs premiered. It is established that Snow White herself loses her mother prior to the film’s beginning, which means the thought of a motherless child was something that Disney was already focusing on prior to Flora’s passing. At this time, the Disney Studios were also working on Bambi and Pinocchio, another two films that showcase dead mothers, prior to Walt having experienced the feeling for himself. And, as we mentioned, Flora’s passing due to asphyxiation means the death was sudden, and Disney had no reason to have any personal connection to motherless characters prior to her passing.

That being said, I have a rebuttal for my rebuttal. Many early Disney animated films were derived from fairytales as the source material. If we look at Snow White and the Seven Dwarfs, Snow White didn’t have a mother in the original story. Gepetto also never had a woman in his life, according to the original story, and in 1923 when the fairy tale of Bambi was written entitled Bambi in the Woods,  Bambi has to watch the death of his mother in order to gain the motivation to survive on his own. If there is one thing here that is for sure, the original fairy tales are the ones here that pre-determined the death or non-existence for these Disney moms. Source material like fairy tales led to animated features for Disney that were highly successful, so it is no surprise that the Disney Studios could have taken on the mantra, “If it ain’t broke, don’t fix it,” carrying on with motherless characters already established in fairy tales.

Related: Disney Fans Worried How Bambi’s Mom Death Will Be Portrayed In Live-Action

We should dissect the fact that although the source material may be, at times, the cause of motherless characters, and many Disney films up until now, including original storylines such as Lilo & Stitch, continue to have characters with mothers who have passed away. But first, we need to find out why mothers were dying in the first place.

Jack Zipes, author of Happily Ever After: Fairy Tales, Children, and the Culture Industry, mentioned, “Historically speaking, people did not live very long from the medieval period through the early 20th century. Women died frequently from childbirth. Therefore, there were many single parents, although men tended to marry quickly after their wives died as in Snow White and Cinderella.”

Women during this time were often seen as expendable, with their main purpose being to reproduce. Therefore, for the purpose of a story, the mother may have been cut out after she served her purpose. So, it seems that what fairy tale novelists would do was create fiction, but still allow that fiction to be rooted in real life, perhaps making it more relatable. This, in theory, could be a brilliant idea considering giving the story a realistic base allows the readers to connect with the story while also encouraging believability by allowing the reader to develop sympathy.

This isn’t to say that Walt’s experience of “causing” (in his opinion) his mother’s death wouldn’t later transcribe into his films, but it’s not where the trope would have originated. So, why do modern Disney films still create these motherless characters, from Beauty and the Beast, to Tarzan, to Frozen, and the list can truly continue to go on and on, Disney characters often lose their moms.

Aside from the fact that Disney is still using classic fairy tales as original source material, another possible explanation for it could stem from the reason Bambi had, which is the fact that the loss of a mother causes you to grow up and accept responsibility — something nearly every Disney character must often do. As a stereotype, mothers are often seen as nurturing and protective. If you have a mom, she will always make sure you are okay. Would Elsa have ever become Queen of Arendelle without having no other choice? Would Anna have risked her life to save her sister if her mother was there? Likely not, because the person with the highest authority and maternal power would have probably taken over the situation as the leader — plus we know from Frozen 2 that Anna and Elsa’s parents would risk their lives for their children, so Anna would never have had the chance to save Elsa, as that would have put her in danger. This theory is not without its holes as well, but in many cases, proves true. The story of Frozen would have been very different if Anna and Elsa had not lost their parents.

Even when the mother doesn’t die, but is simply removed or transformed in the story — such as in Brave when Merida’s mother turns into a bear — the character needs to step up and take charge of the situation. Therefore, it seems that in order to propel the story forward, the loss or suffering of a parent is almost essential.

The Disney films may also serve as a way to educate kids on the idea of death. Many children begin to watch Disney films at a young age, and instead of learning about death in a scary way, understanding it through a fairy tale and seeing that things can still turn out alright is a crucial message to help kids understand the circle of life.

In the end, there is a clear pattern and formula here that not only Disney and other studios continue to abide by (take Harry Potter, for example). That being said, the constant use of a dead parent trope at Walt Disney Studios could be due to its success as a formula, or it could be a continuation of Walt’s pain — and, in turn, the pain many people feel when they lose a mother — or even just a good way to propel the plot. The answer here is not clear, but if there is one thing that is almost certain, it’s that we are definitely not finished with dead moms in Disney movies.

Why do you think Disney moms pass away in so many Disney films? Let us know in the comments below.

Editor’s note: The opinions expressed in this article do not necessarily reflect the views of Inside the Magic overall.