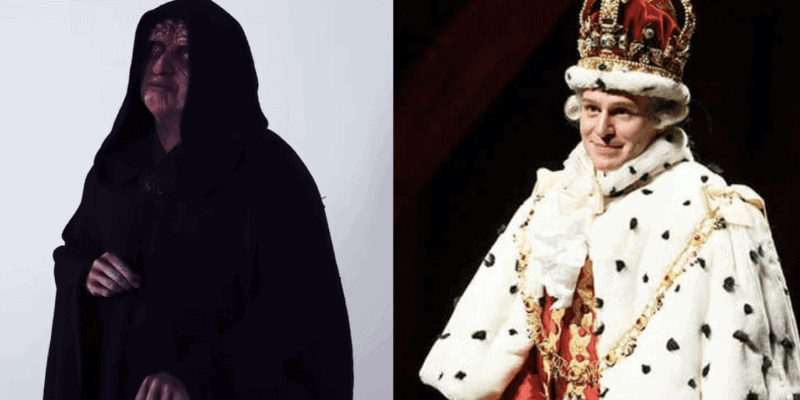 In the realm of mash-ups you probably never thought you’d see, Star Wars and Lin-Manuel Miranda’s Hamilton — with a dash of Frozen (hi, Jonathan Groff!) — might top the list.

Related: PHOTO: What Emperor Palpatine Almost Looked Like in ‘Rise of Skywalker’

And yet, it’s 2020 and here we are with a hilarious rendition of Groff’s (as King George III) “You’ll Be Back” song from Hamilton, as performed by Sith Lord Emperor Palpatine.

The “You’ll Be Back” parody was put together by YouTube user BJ Whimpey and you’ll just have to watch it to understand how hilarious it is. In the comments, many fans’ favorite part was, as viewer Mikhail Roberts wrote, “that the “Da da da dat dah~” Is the imperial March. Too much fun.”

Krypton Radio shared some details about the production of the parody performance, which features some of the most impressive Palpatine make-up we’ve seen outside of Star Wars: Episode III – Revenge of the Sith (2005):

This isn’t the first collaboration for BJ and the Gordon family as they have worked together on a number of other projects since they first met in 2004 at a “24 hours of the Force” at Wal-Mart celebrating the release of Episode III toys.

BJ and Shawn co-wrote the new lyrics and Shawn applied the Palpatine make up to BJ, who performed with an impressive rendition of Ian McDermiad’s voice while delivering the catchy tune. While the set is limited to a white backdrop, the production is a beat-for-beat duplicate of King George’s solo number, including the shoulder bobbing.

Jace Gordon directed and the sound was mixed and mastered by Andrew Glasmacher. For the Gordons, it really is a family affair. Shawn and Shane are twin brothers, with the former being a special effects makeup artist. Shane is married to Larissa, who makes an appearance alongside him and and their adult son Dalton and as Stormtroopers. The video is directed by their other son, Jace. For his part, BJ is an actor and voice-over talent.

For comparison, a version of Jonathan Groff’s performance of “You’ll Be Back” in the Hamilton Broadway show can be seen below. It was shared by YouTube user Luke Gawz:

What’s your favorite part of the Emperor Sheev Palpatine parody of “You’ll Be Back”?

Comments Off on ‘Star Wars’ x ‘Hamilton’? You’ve Never Seen Palpatine Like This!