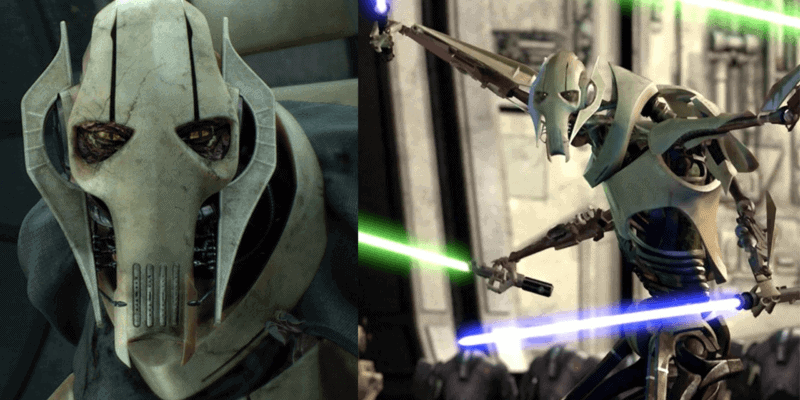 Okay, so we know that many Star Wars fans aren’t fans of the prequel trilogy, but hear me out on this one.

There are many fantastic moments dotted throughout the prequel trilogy and if you were a kid when Episodes, I, II, and III were released in theaters, you might even find yourself feeling fondly toward the prequels.

One of the many exciting elements to come from the Star Wars prequel trilogy was the commanding officer of the Confederacy of Independent Systems, General Grievous. The feared Jedi hunter makes a big impact on the screen during his time in Star Wars: Episode III – Revenge of the Sith (2005) before falling to Obi-Wan Kenobi (Ewan McGregor) on Utapau.

He was so popular with fans that Dave Filoni and the team brought him back in a big way in the Star Wars: The Clone Wars animated show and movie. We also saw a little bit of background as to who he was in the episode Lair of Grievous, where he ends up killing the apprentice of Kit Fisto. We’ve also seen comics explore his origins and this writer is convinced that it would make the perfect story for a live-action Disney+ show.

If you’ve just seen the movies and perhaps the animated shows you may not be aware of the reasons as to why the General is always coughing and why he has such a hatred for the Jedi.

General Grievous started his days as a Kaleesh Warlord where he learned the ways of combat and rose through the ranks to become a General in a war on his home world, Kalee. It is there he fought against the Huk — where his side was

winning until the Jedi turned up to push the Kaleesh army back.

Grievous suffered extensive injuries after his shuttle crashed and began the process of replacing his body with the robotic parts we see when we first meet him in Revenge of the Sith.

Related: Have Younger “Star Wars” Fans Made “Revenge of the Sith” a Cult Classic?

Obviously, as a result of the Jedi interfering with the war and him suffering a huge personal loss in his people being wiped out, Grievous harbors immense ill will  toward the Jedi Order, leading him to want to hunt all Jedi down. Count Dooku took him under his wing as a result of this and trained him in certain Sith techniques.

Imagine a Disney+ show that starts at the beginning of the war and showcases the journey of General Grievous from his beginning on Kaleesh to commanding the droid army and becoming a Jedi hunter before we first meet him in the Star Wars movies. It would be incredible to watch his journey unfold and for us to see the story play out from his perspective.

We know the villainous character has a lot of success hunting Jedi and it would be fascinating to see the Jedi Order get increasingly concerned as this General takes command of the droid army, beginning to wipe out some important members of the Order and add to his lightsaber collection. Heck, we’d even take an animated series if it meant more onscreen time for General Grievous!

Do you think that General Grievous deserves his own show? Let us know in the comments below!

Comments Off on OpEd: A General Grievous Show Is Exactly What We Need on Disney+