OpEd: Disney's Keister Coaster is Worse Than the Clown Slide - Inside the Magic 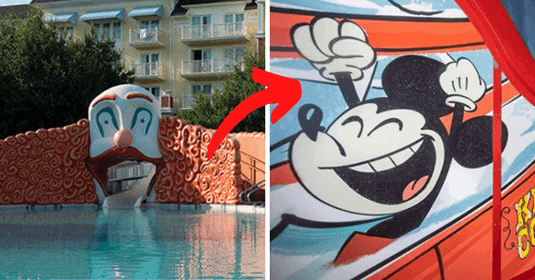 Send in the clowns! Disney’s BoardWalk Resort has been refurbishing the Luna Park Pool to rid their Guests of the clown pool that, let’s be honest, could cause a nightmare or two. Personally, I didn’t love the clown pool necessarily, but I also didn’t hate it and would have rather been spit out of the Steven King horror character’s mouth than the new Keister Coaster that was recently unveiled by the Disney Imagineers.

In case you haven’t seen the new Keister Coaster, it looks like this.

The reason I think this new facade is so underwhelming is because of the potential it had, mixed with the vocal cry for change from plenty of Guests. What was once a huge spectacle at the pool is now, in my opinion, a cute looking construction wall. The one good thing about the clown was that it really was the one thing that gave the pool a sense of character, as it was truly the main focus of the BoardWalk Resort’s main pool.

When Disney announced that the Luna Park Pool was going under refurbishment and Disney fans caught photos of the giant clown covered up, the company was met with mixed responses. While there were some Disney fans who shared they would miss their beloved clown, others were ecstatic. Although a clown does fit the idea and theming of a boardwalk, this one did need some sprucing up.

With a boardwalk theme, Disney had so much room to play around and have fun with a new concept design for the waterslide’s spout, and many Guests, including myself, were excited to see what grand direction Imagineers were going to take the design. Boardwalks often have carnival and amusement park aspects to them, which is clearly where the clown idea was drawn from, and playing off the loud colors, and eye-catching attractions seemed like the right call.

We later learned that Mickey Mouse and the gang were going to be featured on the new Keister Coaster waterslide, which was music to my ears! I love Disney characters, and so do Guests, and I don’t think any Disney fan would ever be opposed to seeing more of them. I instantly thought about how we were going to see the characters incorporated into the pool slide’s new design, maybe Donald Duck is flying off the handrails of a roller coaster ride vehicle while Mickey tried to save him, and Minnie and Daisy could have been on the ground level with our tanning and enjoying the pool — the possibilities felt endless! Plus, there is already a Mickey short that features the foursome on a sailing adventure, so the two could have even linked up!

What we instead got is Disney characters on the facade of a structure that resembles the outline of the Luna Park Pool clown without the themign. As I mentioned earlier, this looks like a nice construction wall — not dissimilar to Disney’s scrims — but not a permanent visual. To go from a grandiose huge clown head that drew so much attention to a basic wall that isn’t even half its size and gets lost among the waterslides white structure seemed like the cheap and safe route for Disney, but definitely not the creative one.

And I am not alone in my impression of the new Keister Coaster! Many Disney fans have been discussing the underwhelming reveal of the waterslide. Reporter Alicia Stella made a great point stating:

Look, I hated the cursed clown face too, but this looks like it’s themed as a backstage Cast Member gate. Okay, I figured out what the Boardwalk water slide wall reminds me of… The graphics on a resort refillable mug.

Okay, I figured out what the Boardwalk water slide wall reminds me of… The graphics on a resort refillable mug. https://t.co/WAXqRo7lV5

Aside from the fact that the design does look exactly like a refillable mug exterior, the Tweet elicited a chain reaction, and there was one note that was made by Epcylopedia, and that’s that “drawing attention to it was a mistake.”

Drawing attention to it was a mistake.

Disney made it very know the BoardWalk pool was losing the clown face. Walt Disney Imagineering recently posted a photo to their Instagram of the coasters name, creating additional hype for the reveal (after spelling the coasters name wrong in the first reveal, which was a mistake but again drew more attention to the waterslide). By doing this, Disney fans were expecting something major…

But what we got was this: a water slide exterior that is adorable, but something that wouldn’t make me glance twice or convince me to book a room at the Deluxe Disney Resort. If Disney chose not to draw attention to the change, perhaps it wouldn’t have been as disappointing once the Keister Coaster was revealed.

All of this being said, the design is still cute, and if it is ever offered on a refillable mug, I will most definitely buy it, but I expected much more from this project. Having a larger-than-life, 3-D facade of an actual coaster vehicle and then launching out of it would have been fun, or even a carnival game theme that involves Guests popping out — there are so many ideas that could have been brought to life but weren’t.

Do you like the new BoardWalk Resort’s Keister Coaster, or would you prefer the old clown at the Luna Park Pool? Was it underwhelming to you as well?