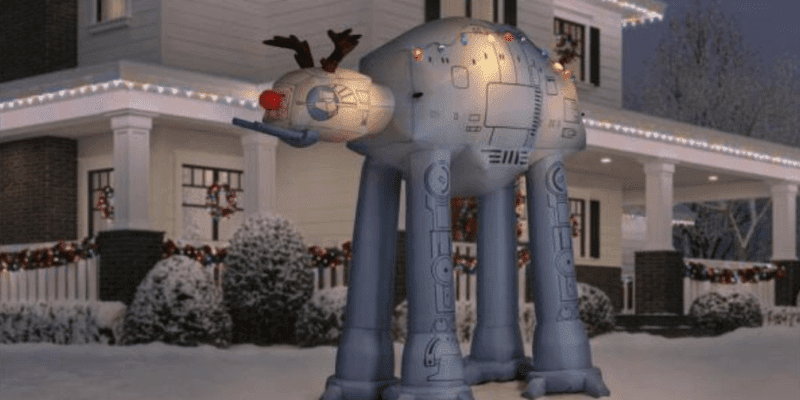 Deck the Halls with Armored Transport, fa la la la la, la la la la! Grab these Star Wars inflatable characters to make merry at your home this Christmas! For sale at Home Depot right now, is a giant AT-AT vehicle decked in lights that’s exactly what you NEED Santa to being you. There’s also a Master Yoda standing guard on a present stack and a sweet R2-D2 in an X-wing taking flight! Peruse the galactic offerings below and May the Holiday Be With You! 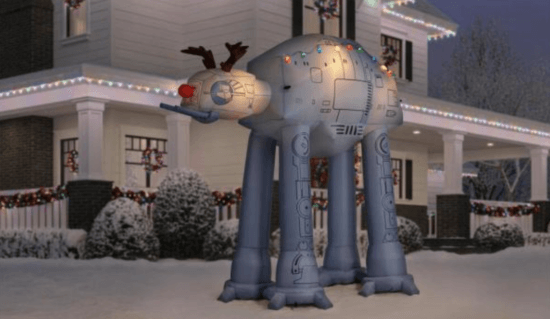 Defend your home with a giant 8.5 foot All-Terrain Armored Transport this holiday season. The star wars vehicle is decked out in gay apparel like reindeer antlers and a shiny red nose… you could even say it glows!

A festive bulb light string is draped across his back – it’s not printed but instead a real light string with vintage bulbs. Star Wars inflatable with instant, LED-lit inflatable for indoor or outdoor use, $149.00 at Home Depot.

“Deck the yard with an Airblown Inflatable AT-AT deck out with reindeer antlers and a red nose. A must-have for fans of Star Wars, this iconic inflatable makes an eye-catching addition to your Christmas decorations. Features a multi-color light string. Setup is super simple. Just plug it in, stake it down and watch the magic unfold. Includes everything needed for easy outdoor setup.”

A sweet little R2-D2 takes flight in an X-Wing right on your lawn! The magical flight is courtesy of a clear air blown tube holding the spaceship up, as R2-D2’s Santa hat tops the decoration.

“Perfect for Star Wars fans, this X-Wing airblown inflatable makes a great addition to the Christmas display in your yard. The 6-ft. aircraft is carrying a special passenger: R2-D2 in a Santa hat. This pair is ready to join the holiday festivities. This attention-grabbing decoration is incredibly easy to set up. It self inflates in moments. Simply plug in, stake down and watch the magic unfold before your eyes. The X-Wing also includes internal LED lights to produce a merry glow at night.”

I mean… don’t we all need this sort of Star Wars Christmas cheer??? He’s so sweet looking upon takeoff!

Here’s a closeup look at the support tube, with LED wires draping down the side. It’s pure holiday magic as the Star Wars inflatable goes up in seconds.

“Even Yoda joins in the Holidays. Greet your guest with Yoda and the Force this season. Using the Force for good this season.” The airblown 6-foot-tall Yoda Star Wars Inflatable goes up in seconds and can be set on a light timer for easy use. Suitable for outdoor use, $64.98 at HomeDepot.com

May The Yoda Be With You – SHOP HERE

Which of these Star Wars inflatables will you add to your home this year? Leave us a comment below!