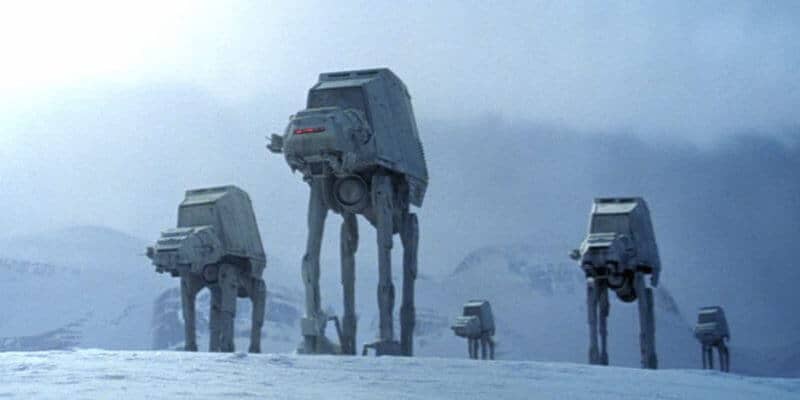 We’ve known for some time that the Star Wars: Galaxy’s Edge area coming to Disneyland and Disney’s Hollywood Studios next year would feature those famous AT-AT Walkers (which first appeared in 1980’s “The Empire Strikes Back”) in its First Order battle attraction. But until now we haven’t received too many details about the scale and function of these giant vehicles until now.

At this past weekend’s Star Wars Galactic Nights event at Walt Disney World, Disney Imagineers shared some new revelations about the AT-ATs and an all-new Resistance Troop Transport vehicle that will all be built full-size in order to fully immerse guests in an exciting, meticulously-constructed “Star Wars” experience.

“These are so massive, when they appear in the films they’re typically done as a digital effect, so nobody’s ever thought about doing these full-size practically before,” said Imagineer John Georges. “It’s been quite a feat, actually, to pull this off completely. Really amazing attention to detail. Our partnership with Lucasfilm [throughout] this whole project has been so seamless. We’ve had access to the filmmakers and Doug Chiang on the design team, so the accuracy and the level of detail on these is unprecedented.”

“We have another ship as part of this experience that’s a Resistance Troop Transport. This is an actual, physical, full-size ship that you’ll actually step on board and set off on an adventure of your own. If you’re gonna go inside one of these epic experiences and live a piece of ‘Star Wars,’ this is what you’d expect: to be part of the story.”