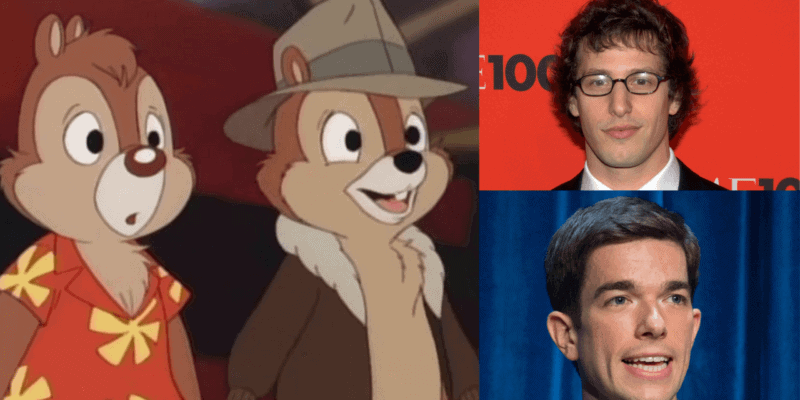 A couple of months ago we broke the news that a new Chip and Dale movie was coming to Disney+ and now we can reveal even more exciting news that has come from the Disney Investor 2020 Day regarding the movie.

In a strange move, Disney has announced two incredible stars are joining the movie to play Chip & Dale. Andy Samberg has joined to play Dale and Chip is being played by John Mulaney.

Andy Samberg is of course now an international star thanks to Brooklyn Nine-Nine but he’s also starred in the new Dark Crystal show, the three Hotel Transylvania movies and Saturday Night Live.

John Mulaney, famous for movies and shows including Big Mouth, Spider-Man: Into the Spider-Verse and Saturday Night Live.

The new original Chip & Dale: Rescue Rangers movie will be directed by Akiva Schaffer (Hot Rod Popstar: Never Stop Never Stopping) so this movie looks to be a bit of a reunion of The Lonely Island comedy group and Saturday Night Live stars!

We think it’s pretty unlikely that they will apply some form of voice changer to these big stars, however, anything can happen so we could see some form of treatment as we saw in Detective Pikachu where there’s a reason as to why Chip & Dale don’t have their signature high-pitched voices.

The classic Rescue Rangers TV show was loved by thousands of fans back in the late 80s and early 90s and was canceled after just 3 seasons. The format of the show sees Chip and Dale fighting crime but we’ve seen no indication of what the plot to this movie is likely to be — but it seems that this won’t be an origin story and instead we will see some form of continuation of the detective agency story from the series.

There is going to be plenty coming to Disney+ in the coming months and years with both huge new Marvel and Star Wars projects announced!

Are you looking forward to the new Chip & Dale Rescue Rangers movie? Let us know in the comments below!