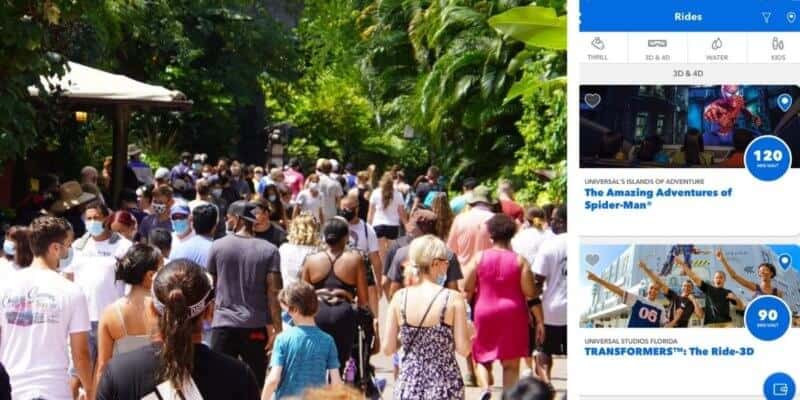 Universal Orlando Resort has been a blessing during the pandemic — especially to Florida residents — who want to just wake up in the morning and head to a theme park. As we know, this is a luxury we do not get over at Walt Disney World (since Disney is implementing a reservation system). However, because of this, it seems that the Universal theme parks are getting rather crowded, and wait times are more — or, in some cases, worse — than pre-pandemic.

Although Universal’s two theme parks — Universal Studios and Universal’s Islands of Adventure — have been hitting capacity almost every weekend, we are now seeing mid-week spikes in wait times. A time when many Universal guests thought they could avoid the larger crowds and higher crowd count. The interesting thing here, though, is that Universal Orlando’s theme parks are rarely hitting capacity in the middle of the week.

If we take a look below, right off the bat we can see that The Amazing Adventures of Spider-Man is a two-hour wait, and although nothing tops that, you are still seeing 75 minute waits for Shrek 4-D, and 90 minutes for The Simpsons Ride. Almost every attraction at Universal Orlando currently holds the same fate, you will be waiting over one hour (and in most cases closer to two) to ride.

The spike in weekday guests comes shortly after Universal Orlando sent out a request to their Annual Passholders asking them to avoid weekends if possible and stick to weekdays to allow tourists to come on weekends and to try to limit the number of guests as the parks were getting very crowded. It seems that as tourism is slowly beginning to pick up again in Orlando, there really is no day of the week that is going to give you that empty theme park feeling like we saw back in June, when the Florida Universal parks first reopened, and in July, when the Disney World parks first reopened.

Also, Florida’s Governor DeSantis is allowing for theme parks to reopen at full capacity. Although Universal is not at full capacity, there is the possibility that the parks may have silently raised their capacity percentage which would explain the hike in crowds and wait times. Also, with all the new holiday offerings, everyone is flocking over!

Have you been back to Universal Orlando yet? What is your opinion of the crowd levels and wait times?