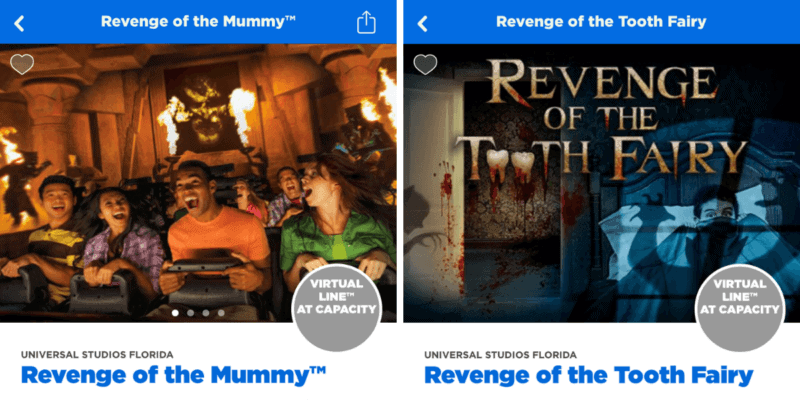 Once again, Universal Studios Florida and Universal’s Islands of Adventure have reached capacity this morning shortly after opening.

It is likely that the addition of some seasonal Halloween elements like Haunted Houses and trick-or-treating are playing a significant factor in the weekend crowds, as some of Universal’s Virtual Lines have also reached capacity this morning. This is including the two haunted houses — Universal Monsters: The Bride of Frankenstein Lives, and Revenge of the Tooth Fairy. The Virtual Line for Universal Studios Florida’s iconic attraction Revenge of the Mummy™ is also at capacity.

It was recently confirmed that Universal Orlando Resort is operating at around 25% of its maximum capacity. But unlike Walt Disney World Resort, Universal Orlando Resort does not have a Park Pass Reservation System. This means that local guests can arrive at Universal Studios Florida or Universal’s Islands of Adventure whenever they want, but it also means that they can arrive to find those theme parks, rather surprisingly, at capacity.

While Walt Disney World has its availability calendar on its website to let people know ahead of time when its theme parks are going to be at full capacity, and Universal has created a capacity hotline.

The number to call for Universal’s Capacity Hotline is (407) 817-8317. An automated system will answer and will ask you two questions:

The automation will then tell you, quite simply, if your desired theme park is at capacity or not.

As crowds move in and out of the parks, there is always a chance that they will reopen to new guests. We at Inside the Magic like to keep our readers informed on capacity levels at theme parks as fans continue to both make their way back.

If you are planning a trip back to Universal Orlando Resort, our friends at Academy travel are standing by ready to help you make this next vacation, as fun as possible. Click here to learn more and receive your free, no-obligation quote today!

Have you ever been turned away from a theme park because it was at capacity? Tell us about it in the comments!

Comments Off on Universal Theme Parks Hit Capacity This Weekend