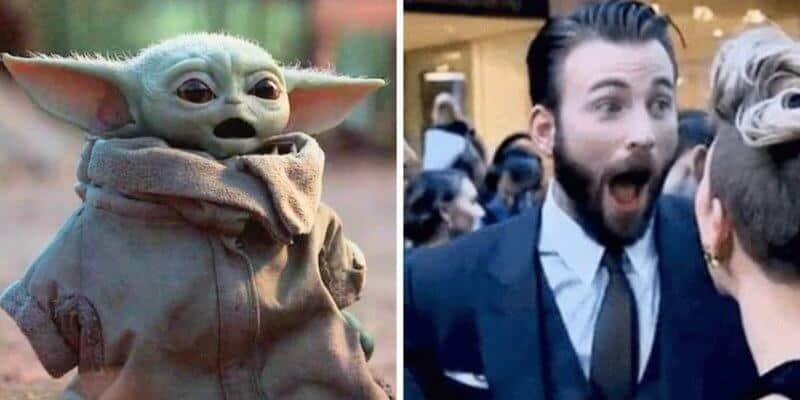 Who would say that two beloved stars from different Disney movie franchises could be so alike? Well, the Twitter account @fallevans showed every Marvel and Star Wars fan what was right in front of us all along.

The Disney Marvel franchise star that plays the handsome Capitan America, Chris Evans, and the cute alien that stole everyones hearts in Star Wars’ The Mandalorian, Baby Yoda, could be the same person!

The twitter thread created on November 24th by @fallevans shows several images of The Child and Chris Evans in oddly — but amazingly — similar situations.

The thread starts with the iconic image of Baby Yoda drinking his soup with a very serious face and beside it, a picture of a very serious Chris Evans with his coffee. Even the way Capitan America’s eye brows are frowning resembles the concave trace around The Child’s eyes.

If that first image didn’t convince you that the two Disney stars are freakishly similar, keep scrolling and you will be socked!

Yes, as shocked as Baby Yoda and Chris Evans’ surprise faces in the next image that shows the two stars side by side.

The reaction to the thread shows that people are loving the resemblance. And what’s there not to love about Chris Evan being Baby Yodas’ spirit animal? Or the other way around, maybe?

The twitter thread has been retweeted over two thousand times, and has received over thirteen thousand likes in the span of two days.

So, what did you think of this thread? Do you agree that Marvel’s Chris Evans and Mandalorian’s Baby Yoda are two peas from the same pod? Let us know in the comments bellow.