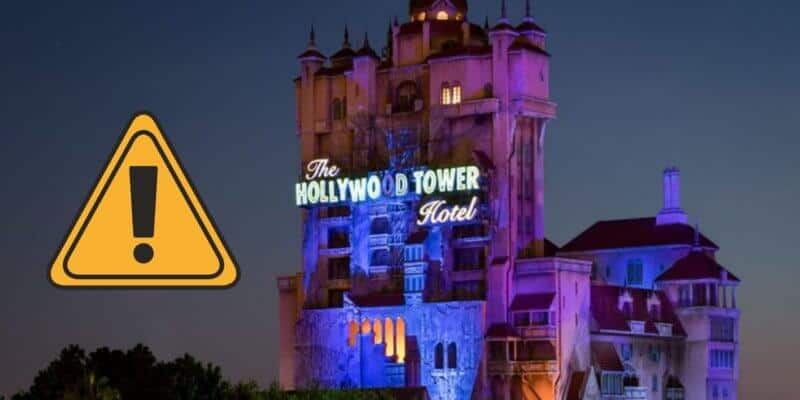 If you are a fan of thrill rides and anything a little eerie, you are likely a fan of The Twilight Zone Tower of Terror attraction at Disney’s Hollywood Studios. If there is one thing that adds to the horror and spooky feeling that the ride immerses you in, it’s sound. Well, today, it looks like Guests are having to forego that key aspect of the attraction.

Inside the Magic Senior Editor Kelly Coffey is at Hollywood Studios, and during her ride of Tower of Terror, the audio cut out during the scariest part of the ride — the drop sequence. When you ride Tower of Terror,  there are a few different aspects to the attraction that are different from the other. You get to see the ghosts, you move into the 5th dimension, and then you complete the massive drop sequence.

The drop sequence has an intro as the elevator carries you up and after that, there are sounds and music tones that continue to emphasize the horror of being in a crashing elevator that is clearly out of control as Guests fly out of their seats over and over. Today, it seems the Tower of Terror audio played until the intro of the drop sequence, but then cut out until the attraction was over, as you can see in the video below. Guests are discussing how there is no sound, but acknowledged it returns once the drop sequence finishes.

The attraction malfunction is seemingly happening on the elevators on the left hand side of the attraction. For those who have visited this Disney park and ridden Tower of Terror, you likely remember that after you exit the pre-show in the library, you head into the boiler room where the line splits in half. So, it seems that those Guests who chose to walk straight towards the left and not turn right at the split had a lackluster experience in regard to the immersive quality of the Disney attraction.

Related: OpEd: Should Tower of Terror at Hollywood Studios Also Get a ‘Guardians’ Retheme?

The right side, however, seems to bed working great with crashing noises terrifyingly shocking Guests during each drop. Watch below as the right side’s audio goes off without a hitch!

Luckily, that part of the ride is often filled with screams, so losing the audio is not majorly detrimental to the attraction. Disney is continuing to load all attraction vehicles, or in this case, elevators, although the malfunction is yet to confirmed by Disney Parks officials to, according to our reporter’s experience, be resolved.

If you want to ride Tower of Terror, why not book a Walt Disney World vacation today? You can begin the magic and start to plan all the rides you want to experience today by clicking here!

Do you think Tower of Terror should operate without audio?