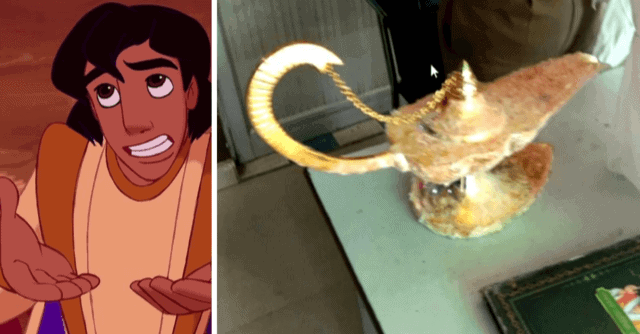 We all know the story of Aladdin. Boy meets lamp, boy rubs lamp, boy meets Genie and is granted 3 wishes. A great tale to be told, and we’re sure you and your friends or family have had the same thought: if you had Aladdin’s lamp, what would you wish for?

Unfortunately, one doctor from India was made to believe he had purchased this magical lamp with his wishes ready. Doctor Laeek Khan purchased a lamp from two men who have greatly convinced him it was the lamp from the tale of Aladdin.

The men were apparently very convincing. According to Dr. Khan, they kept up claims of the lamp being magical. The con men even went as far as to “make a genie appear.” It was only after the fact that the doctor realized that the supposed “genie” was just a person in a costume.  Dr. Khan was even convinced of the two men that the lamp would bring him good health and riches, according to the NYDailyNews.com.

These con men — who are currently in custody and awaiting charges — have a history of conning even their own family. They were able to sell this ordinary lamp to Dr. Khan for 7 million rupees, which equates to a little over $90,000. The men were also able to cheat their families out of several million rupees.

Related: Add Enchantment To Your Tea Time With This Teapot Inspired By Genie’s Lamp

Although the tale of Aladdin and the lamp is so beloved by many, it is good to know that this doctor helped bring these con men to justice. Don’t get us wrong — it would have been really something if this lamp was actually magical. At least we can still dream!

If you were presented with a magic lamp, what would your wishes be? Let us know in the comments!