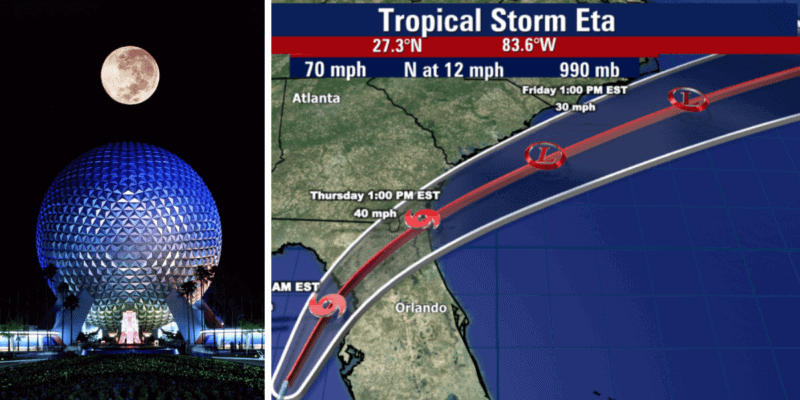 With just over two weeks left to go in 2020’s hurricane season, central Florida finds itself facing down another storm. Tropical Storm Eta has set its sights on the Sunshine State and is expected to make landfall on Thursday.

Walt Disney World Resort is just south of the “cone of uncertainty,” but there is still a chance that the storm could make its way there.

For those of you currently enjoying your Disney World vacation, or are about travel there, here is how Tropical Storm Eta could affect your trip.

Plenty of Rain and Plenty of Wind

Even though it regained hurricane status, Eta has been downgraded to a Tropical Storm since this article’s first publication and looks to remain a Tropical Storm by the time it makes landfall bringing with it plenty of rain and wind that will endure long after it has traveled beyond central Florida.

According to The Weather Channel, as of the morning of November 11, Central Florida is expected to get 2-4 inches of rain through Friday, and Orlando is expected to experience winds up to 35 miles per hour going into Thursday.

Since this article’s original publication, it appears that Eta will remain well north of Disney World and the rest of Orlando. However, heavy winds and rains are still expected.

No Closure Announcements from WDW or MCO

In regards to “worst-case scenarios,” winds and rain could be so intense that Orlando International Airport will have to close, and even the theme parks of Disney World and Universal Orlando may have to close.

However, these storm conditions are relatively mild and do not appear to warrant such closures. Nonetheless, when planning to visit Walt Disney World or Universal during hurricane season, it is important to keep tabs on any weather updates. On the other hand, driving through these storms can still be extremely dangerous and if you plan to drive to Disney World or Universal, we advise that you proceed with extreme caution or reconsider making the drive until after the worst of the storm has passed.

It should also be mentioned that Walt Disney World is built to withstand any sized hurricane, and it is arguably one of the safest places to be when waiting out one of the intimidating storms.

Read More: Why you Want to be at a Disney Resort Hotel During a Hurricane

It is also worth mentioning that Eta will be the first tropical system to come close to Disney World this season since Isaias at the end of July.

Still, if you ever find yourself concerned about your Disney World trip and what your options are, it helps to have a trusted travel agent standing ready to help. That is why we continue to recommend our friends at Academy Travel to help you stay informed and prepared for whatever attempts to come between you and your next Disney World Vacation. Click here to learn more and get started.

Are you worried about Hurricane Eta affecting your Disney trip? Have you ever found yourself at Walt Disney World during a hurricane? Tell us about it in the comments!