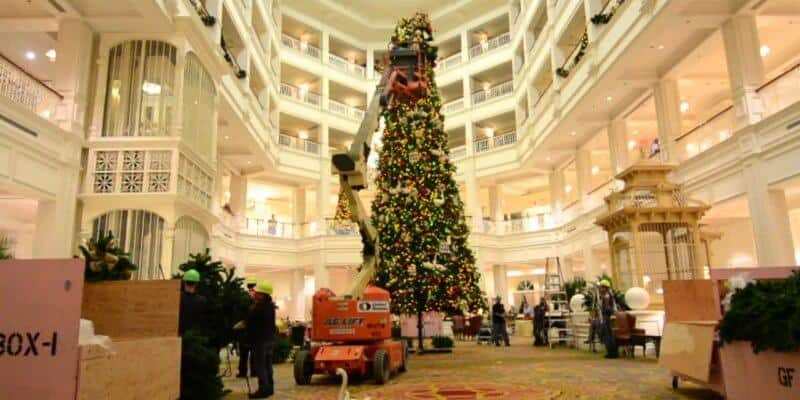 The holidays have officially arrived at Walt Disney World! And, one of the best things about Christmas at Disney is that decorations are placed all over Disney Resort Hotels. Disney’s Grand Floridian is of of the go-to holiday resorts in my opinion — and one main reason for that is the massive Christmas tree that sits in the gorgeous lobby.

We often see the end result of Christmas and holiday decorations at Disney, but we do not know what goes on behind the scenes — until now.

Of course we expect cranes to be used when we think of the Disney Park Christmas trees, such as the giant Christmas tree that sits at the tip of Main St. at Magic Kingdom, but we often forget that Disney Resorts get the same attention as the parks.

Unfortunately, Disney’s Grand Floridian Resort is missing some holiday magic this year. In prior years, without the coronavirus pandemic reducing holiday offerings, the Grand Floridian lobby would smell like delicious gingerbread and boast a GIANT gingerbread house in the lobby as well, making it a magical and festive go-to for Disney Guests.

The lobby would also be filled with classic Christmas tunes performed by the Grand Floridian Orchestra right off the second story balcony, creating the perfectly themed  holiday ambience for the Disney Resort. With the Grand Floridian Orchestra being one of the Disney entertainment offerings to have been cut from Disney World, they will also be missing.

Related: The Grand Floridian Orchestra Will Be Back Together This Holiday Season

Although it will be a different version of Christmas at Disney this year, the magic of Disney and the holidays are still very present and alive at Walt Disney World this year!

If you would like to stay at the Grand Floridian and experience the holidays at Disney for yourself, why not book a vacation today? Click here to add Disney to your Christmas wish-list this season!

Do you think the Grand Floridian is missing holiday cheer with one the Christmas tree up?