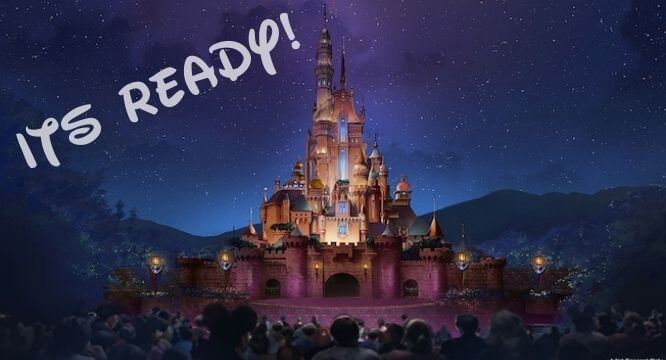 Each Disney theme park worldwide has a beautiful, magical castle inspired by the Disney Princesses. For example, Disneyland in California and Disneyland Paris each have a version of Sleeping Beauty Castle, and Cinderella Castle is at Walt Disney World’s Magic Kingdom and Tokyo Disneyland.

For the past fifteen years, Hong Kong Disneyland has also had a Sleeping Beauty Castle as the biggest icon inside the park. However, a while back, it was announced that the iconic princess castle at Hong Kong Disneyland would go through a transformation. But this transformation would be different than the one of Magic Kingdom’s Cinderella Castle saw. The change would be major!

After months of renovation, Hong Kong Disneyland finally unveiled a one of a kind Disney Princess castle transformation. The first-ever Castle of Magical Dreams, inspired by not one but thirteen Disney characters!

The castle is full of details and references to the princess and queen stories. If you look at its towers, you can see references like Snow White’s apple, Abu (Aladdin), Mushu (Mulan), and Merida’s bow and arrow (Brave).

If that wasn’t enough detail referring to the original Disney movies, there are also murals around the castle depicting each princess and queen pursuing their passion.

For example, as mentioned in the Disney Parks Blog article,  “Cinderella can be seen taking a hot air balloon ride over her kingdom, Aurora is dabbling in falconry, and Ariel is braving the seas on a sailboat to visit her underwater family.”

The castle architecture is also a mixture of the different cultures the princesses belong to, including Europe, China, and Southeast Asia.

As part of the unveiling celebration, the Disney park invited guests, cast members, and Disney friends to share their own dreams and wishes on a “magical dream card.” Even Mickey Mouse wrote his own magical dream card. All the cards were collected and place inside a treasure chest, then they were lifted to the top of the tallest tower in the castle. Such magical symbolism!

However, there was no way that Hong Kong Disneyland resort would just forget about the Sleeping Beauty Castle that was present in its history for the park‘s first fifteen years. So a wonderful tribute to the original castle was made. The three Sleeping Beauty fairies — Flora, Fauna, and Merriweather — can be found casting light into the chandeliers and spreading fairy dust around the castle‘s breezeway.

The Castle of Magical Dreams stands tall and proud as the centerpiece of Hong Kong Disneyland, being a symbol of diversity, inclusion, and magic.

What is your opinion on the new Hong Kong Disneyland castle, the Castle of Magical Dreams? Let us know in the comments below.