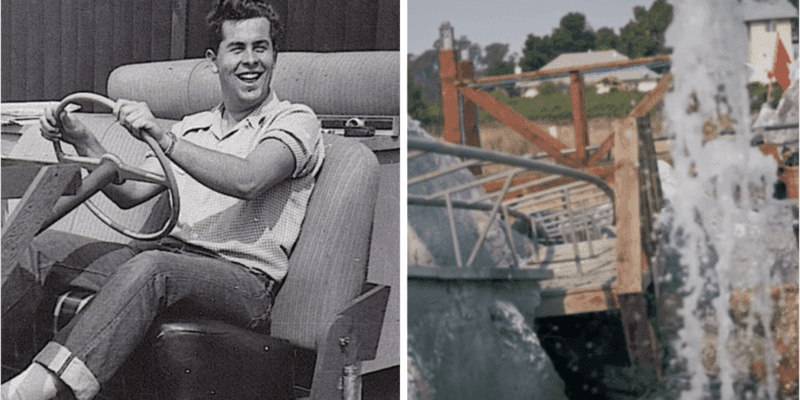 Recently, we reported on an incredible replica of Disneyland’s Matterhorn Bobsleds, built by Napa Valley homeowners!

The LaRochelle family constructed the amazing backyard roller coaster — that even has a Yeti just like Disneyland’s — during the quarantine. To their surprise, the accomplishment has gone viral and has been making the rounds online.

The Napa Valley Register, who originally broke the story about the fantastic pandemic era feat, shared these details:

[the story] got picked up by ABC affiliates across the U.S., “Good Morning America,” TMZ, Fox, People magazine, “Inside Edition,” House Beautiful, the UK’s Daily Mail and more. Sean LaRochelle, one of the inventors of the coaster, was interviewed by CNN and other outlets.

After the Register story ran, “I ended up getting a bunch of emails and calls from a lot of different outlets,” Sean, age 28, said. “It was kind of a domino effect.”

The most iconic person to reach out to LaRochelle? Disney Legend Bob Gurr.

If you’re a fan of Disney Parks Imagineering, you know who Gurr is. The famous Imagineer — who was inducted as an official Disney Legend in 2004 — designed numerous ride vehicles for Walt Disney’s original Disneyland Park, including the Matterhorn Bobsleds.

If you’ve watched The Imagineering Story on the Disney+ streaming platform, you’ve already heard Gurr show off some behind-the-scenes footage of the famous Matterhorn.

Napa Valley Register told the story about Gurr reaching out to LaRochelle:

Now 89, Gurr is said to have designed most, if not all, of the ride vehicles of the classic Disneyland attractions, including Autopia, Haunted Mansion, the Disneyland Monorail, the Submarine Voyage and the Matterhorn Bobsleds.

Sean said he was blown away by the fact that Gurr wanted to contact him.

“He took an hour of his time to talk to me,” said Sean. “He told me about how he built the original (Matterhorn) and how it was not so different how we built ours, funny enough.”

Sean also got to talk to Gurr about Disney Imagineering, the research and development arm of The Walt Disney Company. “He shared some keen insights into that,” said Sean. “That was really cool.”

Some reports have indicated that the LaRochelle’s have plans for additional rides, including, perhaps, Splash Mountain. Stay tuned to Inside the Magic for the latest Disney Parks news — and Disney Parks fan appreciation!

You can sign-up for our newsletter below so you don’t miss a single Disney story.