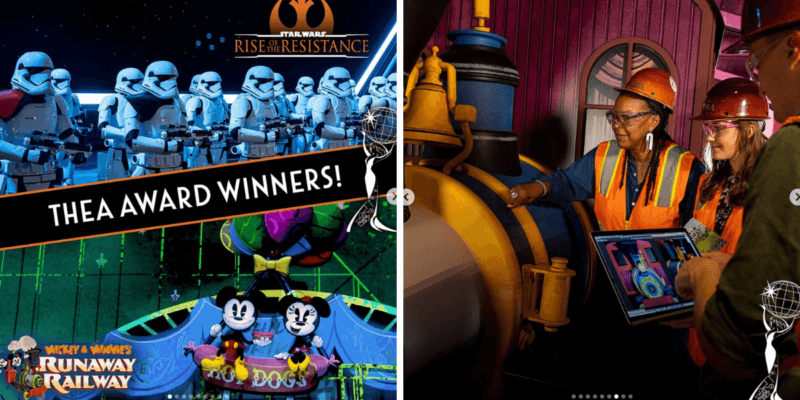 There are two new award-winning attractions at the Walt Disney World Resort in Orlando, Florida. By that, I mean that two established theme park rides have just won awards.

Mickey and Minnie’s Runaway Railway and Star Wars: Rise of the Resistance have both received the Thea Award for Outstanding Achievement in the attraction category.

Both Mickey & Minnie’s Runaway Railway at Disney’s Hollywood Studios and Star Wars: Rise of the Resistance at Disneyland Park and Disney’s Hollywood Studios have received the Thea Award for Outstanding Achievement –Attraction from the Themed Entertainment Association. Congratulations to the hundreds of Imagineers and their partners who worked on these innovative and memorable projects!

These two attractions have truly pushed the boundaries of how immersive attractions can be, and are part of the reason why Disney’s Hollywood Studios has become arguably the most popular theme park on Disney World property, especially during the phased reopening process.

According to Disney Parks Blog, Thea calls Rise of the Resistance, “the most technologically advanced theme park attraction in existence today… The entire attraction, from front to back, is one massive magic trick that leaves riders gobsmacked and represents the absolute pinnacle of how our industry can entertain an audience at a theme park.”

Regarding Mickey and Minnie’s Runaway Railway they said, “With a combination of physical sets, Audio-Animatronics figures, animated media and projection-mapping techniques, all syncing in time with trackless vehicles and a catchy original song and musical score, it turns a two-dimensional cartoon world into an immersive, eye-popping experience. Mickey and Minnie’s Runaway Railway raises the bar for all dark rides to come.”

Rise of the Resistance can also be found at Disneyland’s Star Wars: Galaxy’s Edge, and in 2023, Mickey and Minnie’s Runaway Railway will be debuting at the Disneyland Resort as well.

Our friends at Academy Travel are standing by to help you plan your next Walt Disney World Vacation. Click here to get started!