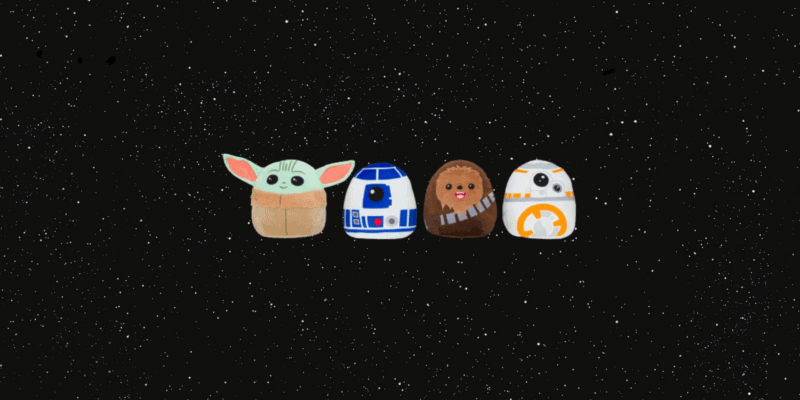 If you’re looking for something cute, cuddly and Star Wars then Kellytoy have you sorted with their new range of Squishmallows.

Squishmallows have been on the scene a while now (since 2017) but this is one of the first big brand partnerships they have done and we can’t believe how awesome the new Star Wars range looks.

Related: What order should you be watching the Star Wars films and shows?

The plush collection features Baby Yoda, BB-8, RD-D2, and Chewbacca and will be coming in both the 5-inch and 10-inch variants beginning October 1st. The collection will begin as an exclusive at Walgreens so unfortunately, you won’t be able to find them at the theme parks, at least for the time being.

Baby Yoda or “The Child” from The Mandalorian was announced back in August and it would seem now we’re getting a full Star Wars collection. Here’s what Jeanne Yoon from Kellytoy had to say when talking to Walgreens about the creation of Baby Yoda:

Squishmallows have a smooth and soft surface, so we cannot add certain characteristics like wrinkles and glossy eyes. It took a number of steps to get The Child’s features – such as big eyes and embroidered wrinkles – just right. We wanted to balance The Child’s appearance from The Mandalorian series while keeping the look and feel of our cute and cuddly Squishmallows.

There’s been no word on pricing yet but based on previous Squishmallow collections we’d expect anything from $5-$20 depending on the size you wanted.

Squishmallows have already taken the world by storm with over 500 stuffed animals and selling over 55 million worldwide. The new Disney license is going to take them to the next level and make the perfect gift for young and old fans alike. Expect to see all of your favorite Disney, Star Wars and Marvel characters as Squishmallows in the near future!

Will you be purchasing any of the new range of Star Wars Squishmallows? Let us know in the comments below!

Comments Off on Squeeze the Force With New ‘Star Wars’ Squishmallows!