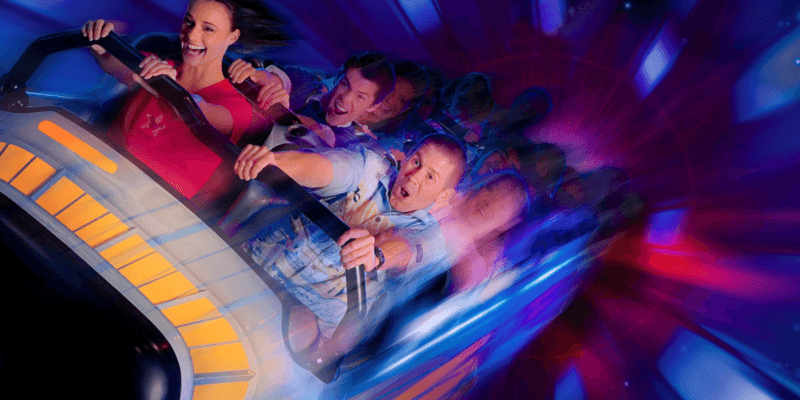 Last week, The Hollywood Reporter shared that Disney is in the early stages of pre-production for a new film based on the legendary Space Mountain attraction found at Disney Parks worldwide.

While there’s no confirmed theatrical release date for the film, Disney has already hired screenwriter Joby Harold, who has worked with Zack Snyder (the upcoming The Flash film), Warner Bros. Studios, and is currently writing and executive producing the Disney+ Obi-Wan Kenobi Star Wars series.

While all of this is exciting and almost assuredly promises a visually-pleasing film, what could the movie be about? There’s no overarching theme or story behind any of the Space Mountain incarnations at Disney Parks worldwide.

Or, is there a story that we’ve all overlooked?

After learning from the success of the Matterhorn Bobsleds at Disneyland Park in Anaheim, California, WED (now Walt Disney Imagineering) utilized a two-track layout, Alpha and Omega, that guests can choose from.

By 1977, Disneyland welcomed its $20 million version of Space Mountain with a 1,000+ square-foot Space Stage, restaurant, and Starcade — an outer-space themed arcade.

When first boarding your rocket on Space Mountain, while listening to that awesome background music, the story of the attraction may seem pretty self-explanatory. We’re astronauts specially chosen to travel throughout the dark galaxy.

Disneyland’s space station is called Space Station 77 and Walt Disney World’s is called Starport Seven-Five. These are hidden references to each attraction’s opening year, but hold on, it makes more sense!

A “Spaceport” is a destination hub designed for intergalactic tourists ready to meet alien friends, like Sunny Eclipse at the Magic Kingdom. The queue for Walt Disney World’s Tomorrowland coaster is heavily designed tourists, with the quote “Welcome, space travelers to Starport Seven-Five, your gateway to the galaxy.”

This also explains why there are games and holographic projections of rockets in Walt Disney World’s Space Mountain  queue. This suggests that we’re tourists waiting to embark on our galactic holiday.

Now, let’s head over to Disneyland’s Space Mountain. Unlike the Magic Kingdom’s version of the intergalactic coaster, Disneyland’s attraction is a “Space Station” that’s either privately owned, like Elon Musk’s SpaceX, or a government facility designed for galactic explorations and missions, not relaxing vacations — we’re never told over the course of the ride. The queue and overall theme of the Disneyland Space Mountain are more industrialized than Walt Disney World’s.

Bingo! We have a far-fetched theory folks. This photo could suggest that all of the Space Mountain attractions are connected, yet there’s something darker at work.

Perhaps in the movie, each space station/starport is disconnected and a brave team of astronauts has to band together and connect each Space Mountain again. Or, maybe the evil ghosts of Disneyland’s Ghost Galaxy take over one of the space stations and an Avengers-like team can bust some ghosts!

Overall, it’s possible that the movie may be centered around various Space Mountains being connected. Or, maybe we missed the mark!

What do you think the Space Mountain movie will be about? Let us know in the comments below!

Comments Off on What Could Disney’s ‘Space Mountain’ Movie Be About?