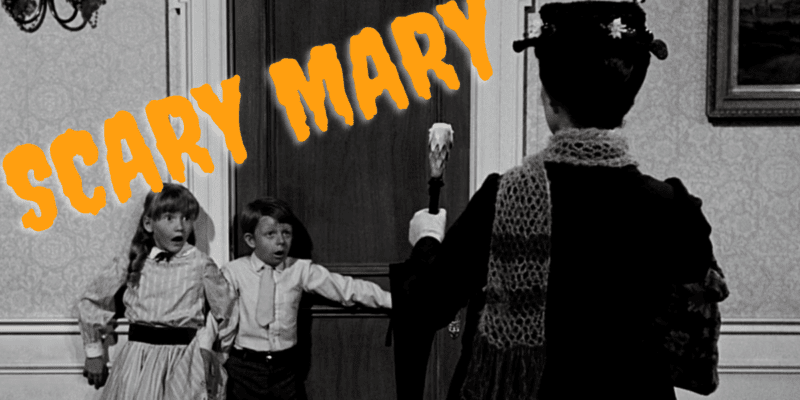 The Halloween season is here and how better to celebrate than with … Mary Poppins?! Yes, ‘Scary Mary‘ is a classic bit of YouTube history that shows off the power of editing.

If you’ve ever been to film school, you’ve likely had Scary Mary thrown in your face as an example of how to alter tone through editing.

The nightmare-inducing edit is incredibly well done and manages to bring ghosts and other supernatural occurrences to this wholesome story.

Related: Interview: “How do I become a Disney Imagineer?”

Scary Mary is by no means news. It was made back in the very early days of YouTube, by @moviemker.

The beloved book turned movie has now been turned into a full-on horror film! This user cleverly turned harmless and iconic scenes from Poppins into purely nightmare fuel. However, knowing how harmless the original story is just adds to the humor and makes it more fun.

Let’s take a look at Scary Mary in all of her frightening glory!

This viral video is perfect for Halloween

Poor Michael and Jane look absolutely terrified! We don’t blame them. With this editor’s great wit in hand, magical scenes like Mary appearing the mirror and packing away the toys with her magic turn into soul-crushing darkness.

The Banks house looks like it’s been possessed by something, and Mary herself is simply horrifying, particularly with the frantic creepy music and the disturbing image of her head spinning around! Yikes!

We’ll let you be the judge of whether you think it’s actually spooky, but there’s no denying that seeing this charming film get a dark makeover is hilarious.

Scary Mary is a testament to the immense power of editing, and we firmly believe it’s something everyone should see! Seeing films re-cut in different styles may be old news today, but Scary Mary was most certainly ahead of its time.

We’ll certainly be thinking twice about meeting Mary for a character meet and greet in the future!