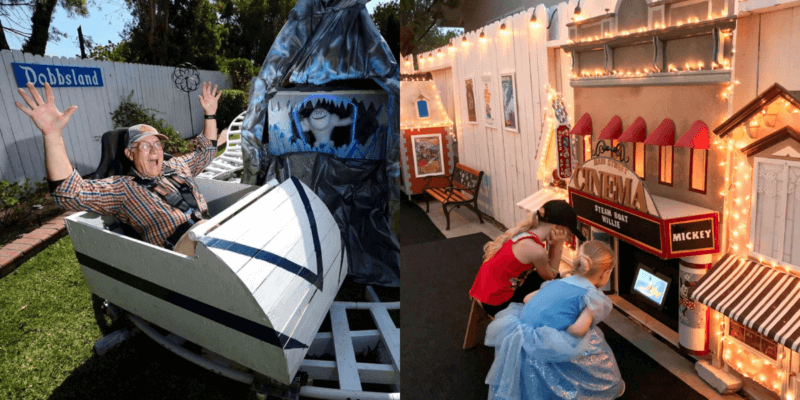 “This is my Imagineering.” — Steve Dobbs

In the backyard of Fullerton resident Steve Dobbs, you will find a mini-Disneyland with a castle, Main Street, roller coaster, and more!

We covered Dobbs and his backyard Disneyland in the past, but now we’re getting a glimpse into more of the story behind his at-home Imagineering.

“There’s a Sleeping Princess Castle, though the inside looks a lot more like the Frozen Ever After ride at Epcot than the walk-through Sleeping Beauty exhibit in the castle at Disneyland. (The kids like Frozen better, so who was he to argue?) That one is a ride-through, connected on the same track to the Winnie the Pooh ride, a log cabin filled with characters from the Hundred-Acre Wood that have their own motors and move to music. They’re both next to a miniature Main Street U.S.A., with M&M Railroad, named after his grandkids, and a movie theatre showing old Disney cartoons. Inside the windows of the theatre: family photos, of course.”

The latest addition is Ruby’s Safari, which pulls inspiration from Jungle Cruise, Indiana Jones, the live-action Lion King remake, and a family cruise to Alaska. Ruby is Dobbs’ 10-year-old Granddaughter. Up next: Their own Haunted Mansion.

“I watched Disneyland get built,” Dobbs said, and that was what inspired him to go into engineering. He has spent 10 years adding to his backyard park.

Now retired, Dobbs said that he once thought about becoming an Imagineer with Disney after getting out of the Army. But he chose to go into aerospace instead because a job was immediately waiting for him. A former employee of Boeing, he now teaches at Cal Poly Pomona, and occasionally collaborates with his students and the school’s Themed Entertainment Association Club.

“This is my Imagineering,” he said.

In fact, his backyard roller coaster, “The Madderhorn,” was a senior project he did with nine of his students.

Related: Kids Can Become Mini Imagineers with Disney’s “Imagineering in a Box”

“I said to them, you’d better make it safe, because my grandkids are going to be riding it,” Steve says. “The Madderhorn” hits a top speed of 12 miles per hour and pulls 1.2 Gs.

But this has also been a project he has done with his grandkids, first building a Jolly Roger pirate ship out of cardboard boxes with his now-grown-up grandkids, and now following Ruby’s lead on the safari adventure.

“The idea is to have an education,” he said. His grandkids are homeschooled and he is using his backyard fantasyland to provide STEM classes with a little extra magic.

Dobbsland also has its own YouTube page, and you can watch some ride through videos and behind-the-scenes moments by clicking here.

What do you think about this backyard project? Let us know in the comments!