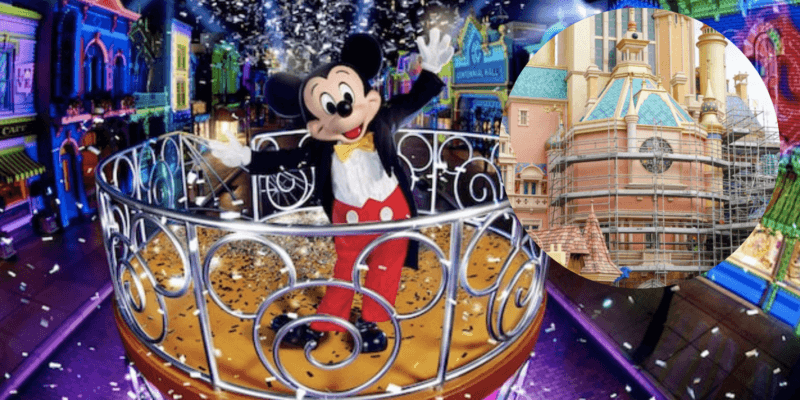 In 2016, it was announced that Hong Kong Disneyland’s version of Sleeping Beauty Castle — then a near exact replica of Disneyland Resort’s castle — would be receiving a major renovation, the concept art was stunningly beautiful.

It can be seen below in an official announcement regarding the theme park’s first reopening following its coronavirus closure. The park then closed again and has remained open since September 28.

Amid the pandemic and the news surrounding Hong Kong Disneyland’s two separate closures, news about the castle’s major transformation has gotten somewhat lost in the shuffle.

Today, however, Twitter account @hkmsg912 has shared updated photos of construction progress on the Castle of Magical Dreams.

The stunning images showcase the castle’s 13 new spires — one for each official Disney Princess — and vibrant color scheme. We can’t get over how beautiful the tile work is on the new roof! It almost looks like Ariel’s mermaid scales.

This is the first time that an existing castle in a Disney park has undergone a transformation of this scale, in what is sure to be one of the most momentous, highly-anticipated unveilings at Hong Kong Disneyland. The new thematic towers and spires are now in the process of being lifted into the skies and fitted into place onto the castle base.

The castle’s design is inspired by the stories from some of the most iconic Disney Princesses. The re-imagined castle will pay tribute to each of these Disney heroines for pursuing their dreams. The architectural elements embrace the characteristics of each heroine through the interpretation of colors, icons, patterns and cultural features, with uniquely designed towers, turrets and spires dedicated to their respective stories. Guests will be able to recognize the individual elements inspired by their favorite Disney heroines, celebrating a sense of diversity, inclusion and unity.

Since Hong Kong Disneyland recently lost its rights to expand and add a second theme park on its property, the castle renovation is, perhaps, an even more welcome change than it previously was, as it gives Guests something to look forward to and get excited about!

The fact that there won’t be a new HKDL park means that it is unlikely the theme park — the second smallest Disney Park in the world next to Disneyland Paris’s Walt Disney Studios — will have space to add many (if any) new attractions in the future.

Instead, if changes are to be made, existing rides are likely to be re-themed, along the lines of Disney California Adventure Park’s Twilight Zone Tower of Terror becoming Guardians of the Galaxy: Mission BREAKOUT! or the upcoming Splash Mountain retheme at both Disneyland and Disney World.

Do you have plans to travel to Hong Kong to see the new Castle of Magical Dreams? If so, let the expert team at Academy Travel help you plan every detail of your trip!