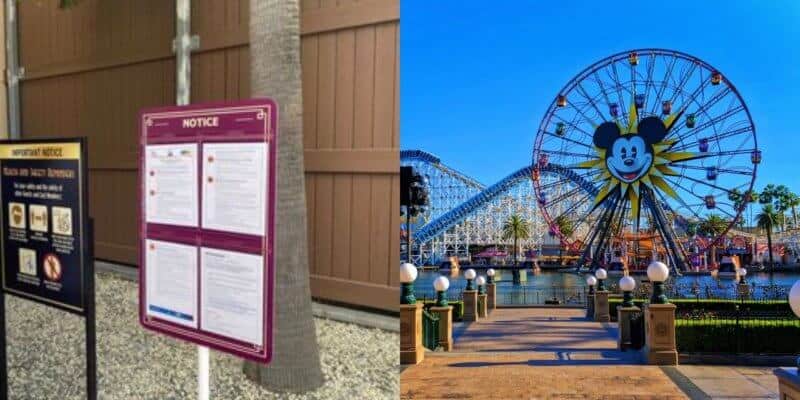 Inside the Magic reported yesterday that Guests waiting for the Disneyland Resort theme parks to reopen would have the chance of entering into Disney California Adventure Park to experience some Disney magic. Today, we took you along with us for the first look inside the Disneyland Backlot Premiere Shop for the grand opening today in DCA!

The Backlot Premiere Shop is in Disney California Adventure Park’s Stage 17 and is available to all Guests visiting the Downtown Disney District, so you can actually enter a Disney park without a park ticket! You just can’t ride anything as the park isn’t officially open to Guests, only for access to the shop, but for now, we’ll take it. The shop acts as an extension to the Downtown Disney District where Guests will be able to enter Stage 17 through an entrance adjacent to the Disneyland Esplanade.

While our Editor-In-Chief, Bailee Abell, was visiting the Downtown District today, there was safety signage up that we have never seen at Downtown Disney as of yet. Usually, the signs we have seen around stores in Downtown Disney or signs around the other Disney Parks such as Magic Kingdom at Disney World Resort look like this and are either blue or beige. The information stated on the signage reads the same.

Since the signage is so consistent throughout shops and parks coast to coast, seeing these in Disneyland or Disney California Adventure when the parks reopen will not be anything new. The signs display proper safety protocol for social distancing, mask usage, and more.

At today’s opening of the Disneyland Backlot Premiere Shop, this new purple signage (photo below) was seen. It is a COVID-19 General Checklist for Retail Employers, and goes into great detail on proper health and safety procedures. There is everything from Contexts of a Workplace Specific Plan to Cleaning and Disinfecting Protocol. Each subject heading shows Guests and Cast Members the very detailed plan.

The interesting thing about this signage is that it comes days after Governor Newsom delayed the theme park reopening guidelines to reportedly take assistance from the theme parks themselves. This delay comes after the California Attractions and Parks Association shared that they did not fully approve of what Newsom and the state had proposed.

Universal Studios Hollywood and Disneyland Resort agreed with his plan but thought more needed to be done to open safely, and the extensive list we see below seems like it could be exactly that, although this has not yet been reported. This is all very speculative at this point, however this is the most detailed signage we have seen regarding safety and the pandemic to date.

We also may be seeing this signage in the parks. We captured a photo outside of the DCA gates, as we peered through, where a very similar purple 4-page sign was displayed outside of Five and Dime.

If you zoom in the resemblance is uncanny. This is not confirmed, however with the signage appearing at the store today, there is a chance we will see heightened safety signs at Disneyland Resort. If the signs are a result of the theme parks collaborating with Newsom, it would make perfect sense to see the signage throughout both Disneyland and Disney California Adventure.

We are still waiting on Newsom to release the theme park opening guidelines, but hopefully this elaborate safety signage we have seen today indicates that Disneyland Resort is one step closer to opening. Stay tuned to ITM to get all the details!

Do you think that there will be lots of guidelines upon DLR’s reopening? Let us know!