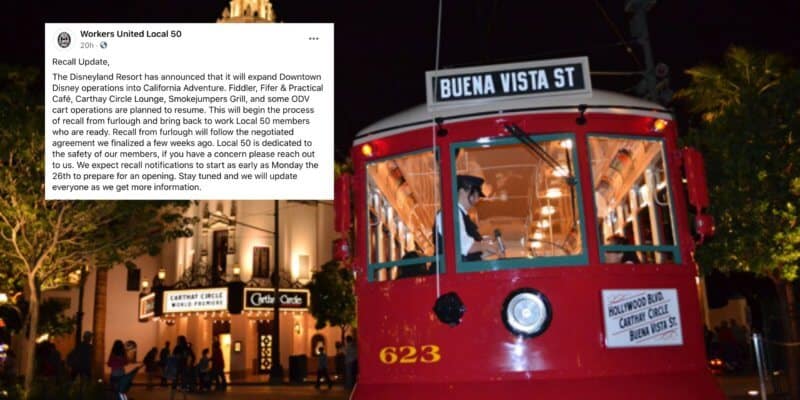 Yesterday, we heard some of the best and most promising news of late regarding Disneyland Resort — Buena Vista Street will be opening to the public for shopping and dining. This will allow Guests to technically enter the beloved Disney California Adventure theme park, and even dine at Carthay Circle restaurant. But to make this happen, Disney needs to bring back some Cast Members!

When we discovered the 28,000 Disney Cast Members were no longer going to be making magic for the time being, our hearts broke. Disney Parks Chairman Josh D’Amaro placed heavy blame on the state of California for not reopening their parks to reignite Disney’s economy and keep people employed.

Well, it seems that since Disneyland Resort is going to be opening just a touch more — adding Buena Vista Street to the list alongside the Downtown Disney District — more Cast Members are needed. This fantastic news comes from Chris Duarte, President of Workers United Local 50 who posted:

The Disneyland Resort has announced that it will expand Downtown Disney operations into California Adventure. Fiddler, Fifer & Practical Café, Carthay Circle Lounge, Smokejumpers Grill, and some ODV cart operations are planned to resume. This will begin the process of recall from furlough and bring back to work Local 50 members who are ready. Recall from furlough will follow the negotiated agreement we finalized a few weeks ago. Local 50 is dedicated to the safety of our members, if you have a concern please reach out to us. We expect recall notifications to start as early as Monday the 26th to prepare for an opening. Stay tuned and we will update everyone as we get more information.

Recall Update,The Disneyland Resort has announced that it will expand Downtown Disney operations into California…

It seems that Local 50 is expecting furloughed Cast Members to be receiving notice to return to work as early as Monday in order to supplement the new Disneyland addition. This will follow the furlough agreement the union reached with Disney a few weeks ago.

Here are some of the highlights:

• Recall from furlough will be done by scheduling group, classification and in classification seniority order.
• Leads, Trainers, some premium positions and some Carthay Circle classifications will be recalled separately with restrictions.
• Notification of recall will be by telephone at least 7 days in advance.
• If the first phone call wasn’t answered, there will be another call 45 minutes later to follow up.
• If you’re unable to return to work you can decline and if you don’t respond to calls within 3 days you will remain on furlough. Company will move to the next person in seniority order.
• If you change your mind about returning, you may request to be recalled on the next wave of recalls.
• If you have to isolate yourself or miss work because of work, you will not receive any points and will be paid.
• Cast will be subject to health screenings when they report to work. If a temperature reads above 100.4 degrees, cast members will be sent home with report pay.

It is exciting to know that with the slow but hopeful reopening of Disneyland Resort, Cast Members will be able to once again return to the magic. Hopefully, this can keep Cast Members spirits up as we await for Orange County to enter Tier 4, where Disneyland can reopen under Governor Newsom’s new guidelines.

If you want to stay updated on all things Disneyland reopening— make sure you are subscribed to our newsletter in the box below!

Are you excited to see more Cast Members back at Disneyland?