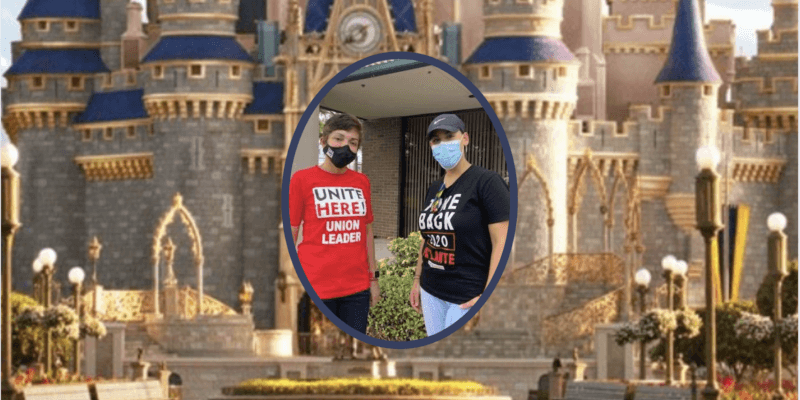 Disney Cast Members, union leaders, moms — Carmen Arroyo and Belinda Hanzman wear a lot of hats. Right now, these two women are focused on leaving a legacy for their children amid The Walt Disney Company’s 28,000 layoffs.

Both Arroyo and Hanzman are employed as housekeepers at Walt Disney World Resort in Orlando, Florida and are members of the Unite Here! Local 737 union.

This union, which represents over 19,000 hotel and restaurant industry workers, recently reached an agreement with Disney officials.

In part, this agreement reads:

“…the STCU and the Company [The Walt Disney Company] have agreed that there will be no permanent layoffs. Any Cast Members who are laid off in the future will retain their employment, their seniority, rate of pay including any scheduled increases, and the right to to return back to previous job with the Company until October 1, 2022.”

This is wonderful news for workers like Arroyo and Hanzman, who rely on The Walt Disney Company for more than jobs — they are leaving legacies for their loved ones.

The duo have been fighting to keep not only their own jobs, but the jobs of thousands of their fellow Disney World Cast Members. As per a report by Orlando radio station 90.7 WFME:

[Arroyo] is a full-time housekeeper at Walt Disney World, and she came to Florida from Puerto Rico.

Arroyo says the job is both security for her family and a legacy for her two kids.

Hanzman, who is from Honduras, works as a part-time Disney World Resort housekeeper. WFME reported:

She said knowing that she will be recalled back when the company’s ready for her to work again is also a relief for her family.

Arroyo shared this sentiment with the radio station:

“Ten years from now I want my kids to talk about what we went through and we came up on top. Because I fought for them. So that’s what is my vision.”

Although it is impossible to know at this time exactly what the ultimate impact of Disney’s layoffs will be, especially on non-union employees who do not have collective bargaining agreements (CBAs), it is encouraging to see this glimmer of hope for Cast Members during these trying times.

We believe it is important to share hopeful stories from laid off Disney Cast Members more than ever right now. The entire ITM team wishes Ms. Arroyo and Ms. Hanzman only the best in the future.

Remember, there are plenty of things you can do if you want to support laid-off Cast Members right now. If you have other ideas for how to provide help to the Disney Parks Cast Member community right now, tell us in the comments!