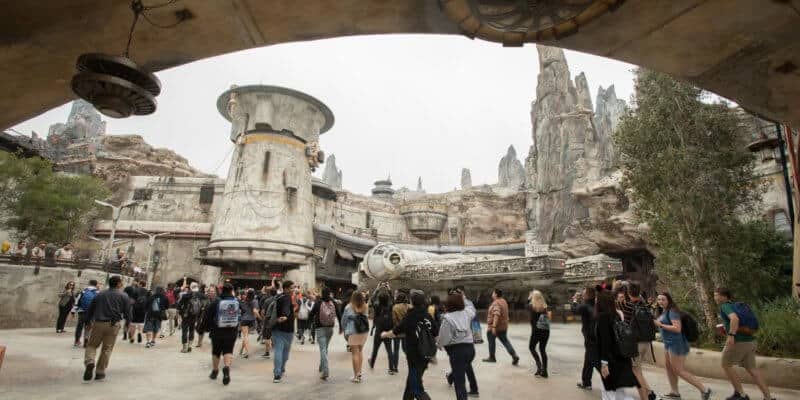 According to recent updates regarding the 28,000 Disneyland and Disney World Cast Members that are being laid off, Star Wars: Galaxy’s Edge employees at Disneyland are being detrimentally affected.

Disneyland Resort has reached agreements with several unions representing Cast Members regarding the furlough, layoff, and recall process. Eleven unions fought to protect the seniority of the Cast Members they represent.

But in recent news, the seniority of Cast Members has been affected if those CMs transferred from one park to another upon the opening of the newest land at Disneyland — Star Wars: Galaxy’s Edge. Those who transferred to Galaxy’s Edge lost their scheduling seniority because Disneyland and Disney California Adventure are their own separate union contracts, Teamsters Local 495 shared.

Teamsters Local 495 had previously said that among the CMs represented by their union, nearly 2,000 CMs across Disneyland and Disney California Adventure would be laid off. But now, it has been revealed that those who transferred to Disneyland from DCA to work at Galaxy’s Edge are losing their jobs.

At the time, the Cast Members who transferred to Galaxy’s Edge were reportedly told that they would not need high seniority to get the hours they would need to work at the new land. But now that seniority has become a factor in deciding layoffs, many Cast Members and their supporters are upset by this news.

Reports state that transferring to work at Galaxy’s Edge from a land within Disneyland — like Critter Country or Fantasyland — did not affect a Cast Member’s seniority at Disneyland Resort. But based on the union contracts, transferring from Cars Land in Disney California Adventure, for example, did.

Amid the hype for the new Star Wars land at Disneyland — the very first land of its kind to open at any Disney Parks — Cast Members were thrilled to transfer. But now their loss of seniority has affected their position at The Walt Disney Company.

Several Cast Members and friends of CMs have taken to social media to voice their opinions of this new development.

Transferring to a new land should NOT mean you lose seniority. That makes absolutely no sense to me. I’m so incredibly sorry for all the CMs who just wanted to move to a what was an exciting, brand new thing. Y’all shouldn’t have that held against you.

From what I’ve gathered, it seems CMs who transferred from DCA to SWGE were basically considered new hires by union standards and all those people are now laid off

are we going to ignore the fact that SWGE CM were still working on main street during Christmas and halloween, we had a pause for new hires in 2019. we had to fight for our right to be in our land multiple times, this entire experience is unfair.

I just saw the union page…. and all I have to say is that this is an absolute BACKSTAB to those CM’s who left for Swge

We will continue to update Inside the Magic with more information regarding Cast Member layoffs as it becomes available.

At this time, Disneyland and Disney California Adventure remain temporarily closed, and with no news of a reopening date, there is no news of when Cast Members will be called back to work.

Our hearts go out to all of the Cast Members who have been affected by these layoffs at the Disney Parks. For more information on how to help CMs during this time — such as through Cast Member Pantry, Second Harvest Food Bank, and employees’ small businesses — click here.