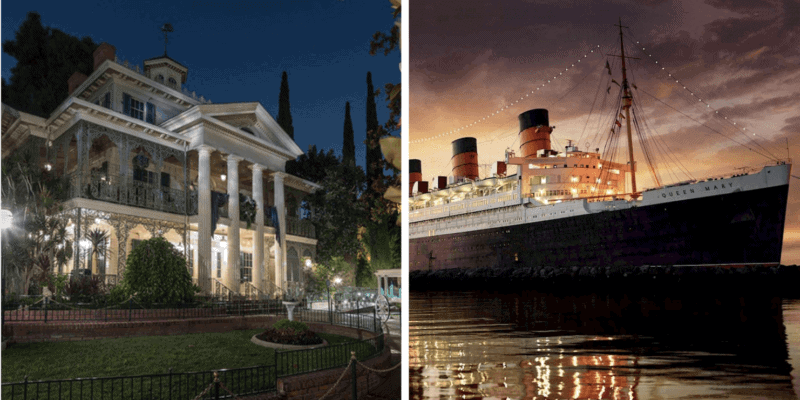 What you probably didn’t realize, though, is that before today’s Disney Cruise Line — whose fleet features the Disney Dream, the Disney Fantasy, the Disney Magic, and the Disney Wonder — Disney attempted to create a Haunted Mansion at sea, based on the paranormal history of the Queen Mary vessel .

To understand Disney’s role in the Queen Mary’s history, you have to understand how historically important the ship is in the first place. RMS Queen Mary was a luxury Cunard-White Star ship — the same kind of transatlantic ocean liner as the RMS Titanic, and very similar aesthetically — launched in 1936 to ferry wealthy passengers across the Atlantic. It carried celebrities like Elizabeth Taylor and Walt Disney himself from America to England, and was widely regarded as one of the premier superliners of its day.

Eventually, the Queen Mary was decommissioned and permanently moved to Long Beach, where it changed owners on multiple occasions. After French undersea explorer Jacque Cousteau’s unsuccessful attempt to turn the vessel into an aquarium, it was acquired by Jack Wrather, who became a Disney Legend in 2011.

SF Gate shared this information about Wrather’s connection to the Queen Mary — and how The Walt Disney Company ultimately came to own the formerly luxurious ship under CEO Michael Eisner:

One of those owners was Jack Wrather, who had ties to Disneyland. When the park opened in 1955, Walt Disney, lacking the funds to build his own hotel, leased land to Wrather to build the Disneyland Hotel. Disneyland tried many times over the years to buy that hotel from Wrather (or, at least, renegotiate the very inexpensive land lease and naming rights Disney granted Wrather out of gratitude for building his park’s hotel when he couldn’t do it himself). All of those attempts were unsuccessful — until after Wrather’s death, when, in order to acquire the hotel, Disney’s then-CEO Michael Eisner also acquired the Queen Mary and a significant parcel of land around it.

The Long Beach investment was definitely not ideal, but Disney attempted to make the best of it. In 1990, the company announced plans for a theme park called Port Disney, which would be dedicated to ocean life around the world, and encompass the ship and the land surrounding it.

If you’re a Disney Parks fan, then you know that Port Disney obviously never came to fruition. However, one of the primary attractions was going to be a haunted tour of the Queen Mary cruise ship, which has, over the years, become synonymous with hauntings and paranormal events.

One of the tours Disney implemented was called Haunted Passages, which capitalized on the many legends and rumors of mysterious happenings on the boat. Besides the incident during WWII, there have been many tragic stories attached to the Queen Mary. There are nearly 50 reported deaths aboard the boat, from crew having accidents in the engine and boiler rooms to a young girl drowning in the first class pool. Rumors abound of truly grisly murders and unexplained deaths aboard, too.

Eventually, the California DisneySea park project was scrapped. Although, it is worth noting that the concept did give rise to Tokyo Disney Resort’s DisneySea theme park, which opened in 2001 — and even includes a Queen Mary replica called the S.S. Columbia.

There are conflicting reports as to why Disney never moved forward with the Port Disney project, some of which blame local government officials in L.A. In 1992, The Los Angeles Times ran an op-ed by Andrew Thompson that stated:

Mayor Ernie Kell, the City Council and port officials have managed to cause the world’s foremost theme park operator and entertainment company to shake its head in disbelief and take billions of dollars in development money elsewhere.”

The most reportedly “haunted” room (Stateroom B340) on the Queen Mary was left behind by Disney, but not by paranormal investigators and amateur sleuths. As per SF Gate’s article:

…that “haunted” room had a different fate. When Disney left The Queen Mary, they locked up B340 and left it behind. It stayed sealed for decades. And the longer it stayed inaccessible, the more the legends around that haunted room grew.

It turns out, when you think something is haunted for long enough, it can actually start showing signs of a haunting.

If you’d like to start planning for next Halloween now, book your stay online and get ready to live out the haunted Disney attraction that never was.