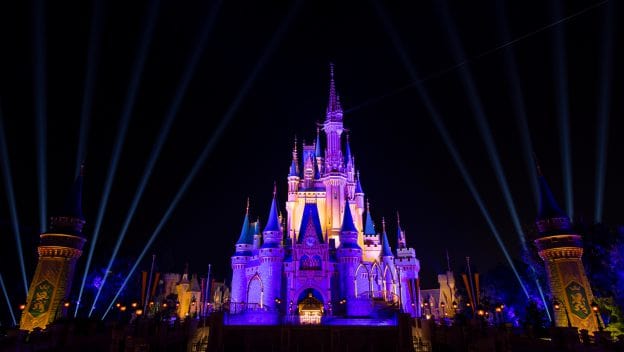 Magic Kingdom’s Cinderella Castle is alit in the Lakers’ famous colors purple and gold tonight. This is to honor and celebrate the L.A. Lakers winning the 2020 NBA Finals in the Walt Disney World “bubble”.

The Lakers were set to play the championship game at the ESPN Wide World of Sports Complex at Walt Disney World. After game six and a momentous win, the resort celebrated the team with a sprinkle of Disney magic!

After a setback in games due to the pandemic, the NBA season resumed the same month that the resort reopened in July. This brought 22 teams to the ESPN Wide World of Sports Complex to compete for a chance to be in the playoffs. It took a total of three months and 205 games for the Lakers to finally compete against the Miami Heat for the victory.

This season was most likely the most interesting season for the Los Angeles Lakers. With the unfortunate loss of Kobe Bryant to the difficulties faced with adjusting their season’s schedule because of the pandemic. Despite the obstacles, the Los Angeles Lakers came out on top. And what a way to celebrate such a victorious win that is followed by Cinderella’s Castle lit up the iconic Lakers purple and gold.

Congratulations to the Lakers on such a great season and an even greater victory!

Are you currently on vacation, and did you see Cinderella Castle light up with the Los Angeles Lakers team colors? Let us know in the comments!

Planning a visit to the Walt Disney World Resort soon? Let us help! Click here for a free vacation quote and to book a trip.