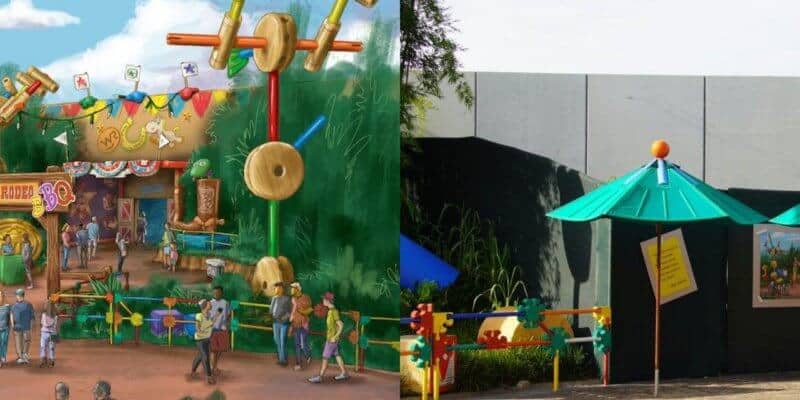 There have been numerous construction delays in 2020 due to the COVID-19 pandemic that have put many projects at Walt Disney World on hold. With the Orlando theme parks gearing up for the 50th anniversary in October 2021, many updates, and new attractions are being added across the resort as a whole. 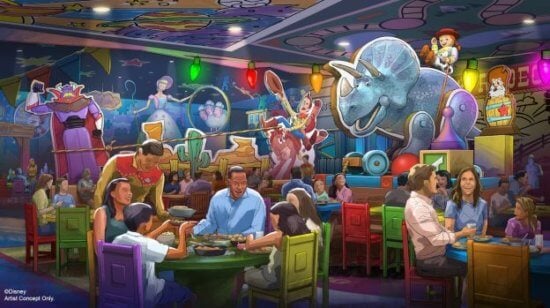 Disney’s Hollywood Studios is one of the parks that doesn’t need much more done to it after the addition of Toy Story Land, Star Wars: Galaxy’s Edge, and the Mickey and Minnie’s Runaway Railway ride. The once deemed “half day park”, now has lots to explore. The one thing Hollywood Studios needs are some more table service restaurants, and Toy Story Land has just the thing: Woody’s Round Up Rodeo BBQ.

When will the new table service restaurant open?

The table service dining experience was set to open at some point in 2020 but construction came to a halt due to the pandemic. But in July we saw that permits were being filed for structure installation, and it looks like things are moving along!

We recently saw a tweet of the facade of the restaurant and a structure has gone up.a

On the green barricades we can see the mock-up photos of what is to come inside the restaurant, but with the grey exterior up and ready, it is looking like we may get to eat with Woody sooner than we think!

Looking at the original concept art, the current grey structure looks like it will be refinished to the cardboard exterior seen below. This is likely the biggest piece of the facade, which hopefully means there are only a few little details to add.

According to Disney, Woody’s Round Up Rodeo BBQ will be Andy’s work of art!

Using three cardboard boxes cut and taped together, Andy has created a new rodeo arena using some of his favorite toys, games, and play sets. And while some pieces are definitely western-themed, what makes this rodeo special is the broad assortment of toys that have been brought together to create a fun, colorful mashup-atmosphere that only a child could create.

Once inside, you’ll be surrounded by all of the rodeo festivities in-action as well as western town and train station play sets. And you just might spot some of your favorite Disney•Pixar characters scattered throughout the restaurant in the form of toys and game pieces including a toy version of Jessie riding on the back of a Trixie pull-toy and unique toy versions of Bo Peep and her sheep, all who appear to be performing in the rodeo together.

This immersive restaurant will surround guests with a kaleidoscope of toys, games, and playsets, providing yet another unique, fun, family-friendly dining experience that could only be had in Toy Story Land.

I for one cannot wait to be surrounded in a toy heaven! Eating and feeling like a kid again are two of my favorite things – and if the Regal Eagle Smoke House over in Epcot is anything close to how this BBQ will taste, we are in for a treat.

Are you excited for Woody’s Round Up Rodeo BBQ? Let us know below.