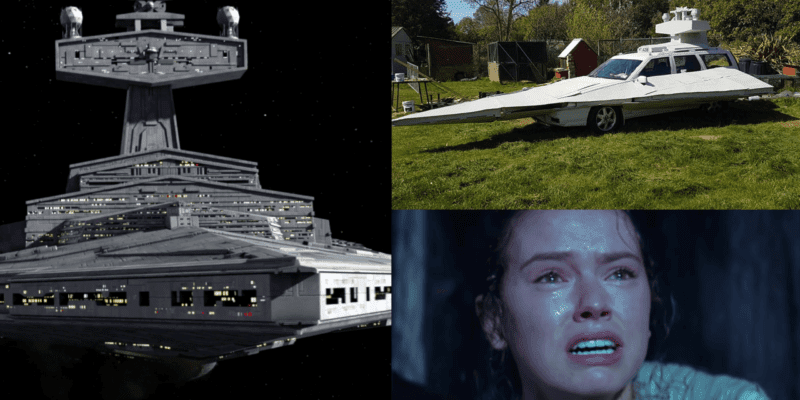 Add this to the list of things we never thought we’d come across, an Imperial Star Destroyer from Star Wars that you can drive. This odd Facebook Marketplace listing appeared and is certainly a… collector’s item.

Sadly, the Imperial Star Destroyer doesn’t have the power to crush the Rebellion but it does do a good job at making an old Volvo V70 look better.

Up for parts or sale complete is this Imperial Star Destroyer. Chase down Rebel scum and tame Princess Leia in this somewhat to scale Galactic Empire Destroyer. Featuring functional Turbo Lasers and Hyperdrive (disclaimer sub warp engine non functional) The ship sustained a direct hit from a X Wing to one of the Shield domes and some hits to the general body from an asteroid field. The ultimate play house or birthday gift for a star wars loving friend.

The only challenge with this ship/car is that it doesn’t actually work. You’re going to need some help from the Empire’s finest shipbuilders (or your local mechanic) in order to get the thing to jump to lightspeed again. If you do manage to fix it up you may have some difficulties with the local authorities given it measures 9 meters long and 4 meters wide!

Related: What order should you be watching the Star Wars movies and shows in?

The less we say on how it looks in the dark the better.

The good news is that the car is being given away for free so you can spend the time on the rebuild if you so wish. If you’re in the United Kingdom, then you are in luck as this can be found for collection in Christchurch, Canterbury.

Though based on the build and the Volvo, we’re not surprised that the Rebellion ended up winning against the Empire. We’re not sure this is going to be causing Han Solo, Luke Skywalker or Chewbacca any issues anytime soon.

What do you think of this Imperial Star Destroyer car? One to use against the Rebellion or best left in an Imperial shipyard? Let us know in the comments below!