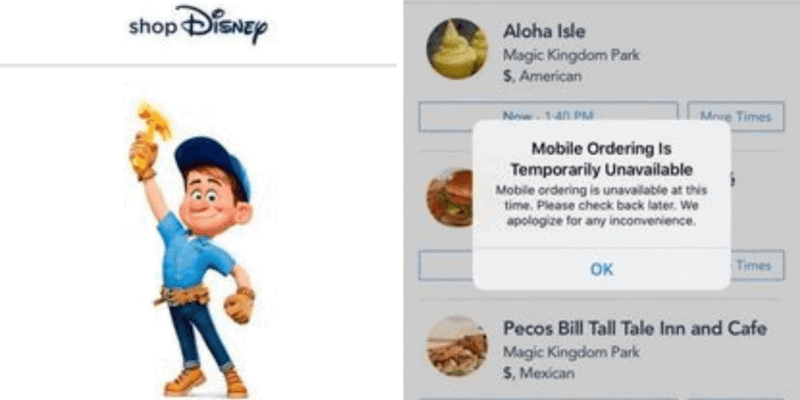 For as yet unknown reasons, both shopDisney and the mobile ordering services on the My Disney Experience app went down today, September 25. We at Inside the Magic are working to continuously update this article as this story develops.

When attempting to access both Disney’s online store and Walt Disney World mobile ordering, we at Inside the Magic were presented these notifications.

This is what it looked like when visiting shopDisney’s website. Fix-It Felix from Wreck-It Ralph comes up to say “We’re making improvements to shopDisney.com and then it will be ready to go and better than ever! Please check back soon to try again and enjoy!”

And this is what it looked like when you try to mobile order from the app.

According to reports on Twitter, it appears that the shopDisney site had been down for well over an hour as shoppers took to the platform reporting it went down right as they were attempting to check-out.

I had things in my cart from the @shopDisney & it's down ?

Was it just the ears that crashed the site or was there other merch?

Mobile Ordering at Walt Disney World also was reportedly down since 9 am this morning.

But since this article’s original publication, it appears that it mobile ordering back up and running at some capacity. @bioreconstruct reported that mobile ordering at Walt Disney World was now working in some areas. However, every screen was still receiving a popup.

Although every screen has this popup, WDW mobile ordering is now working in at least some locations. pic.twitter.com/ho1AyA2CGg

shopDisney confirmed the issues on Twitter explaining, “Our site is currently experiencing and unexpected and extended downtime. We’re working behind the scenes to fix the issue and appreciate your patience.”

Our site is currently experiencing an unexpected and extended downtime. We're working behind the scenes to fix the issue and appreciate your patience.

Since this article’s original publication, it also appears that the technical difficulties have forced shopDisney to reschedule the launch of some of their new merchandise.

The ears will now launch Tuesday at 7am PT. Our apologies for the inconvenience.

There is little doubt that the shutdown of mobile ordering at Walt Disney World is even more of an issue for the theme park Guests as it becomes the standard for more and more quick-service restaurants like Cosmic Ray’s Starlight Cafe in Tomorrowland and stands like the Aloha Isle in Adventureland to prevent the build-up of large crowds.

These issues also comes a few days after Mobile Ordering expands to table service restaurants, and after shopDisney announced the launch of its Halloween Dance Party contest.

At this time we aren’t sure why these websites and features are down, but Inside the Magic will continue to update you as we get information.

Have you been experiencing problems with either shopDisney or the My Disney Experience app’s mobile ordering services? Let us know in the comments!