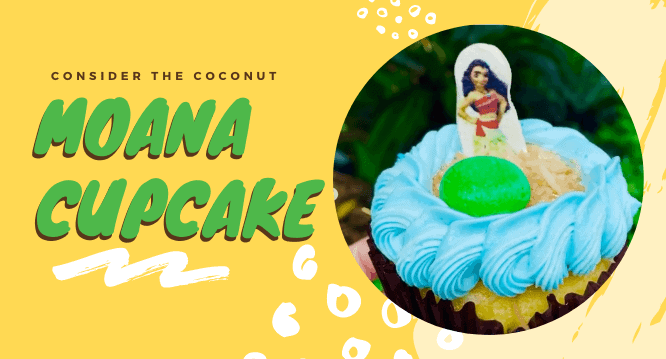 Consider the coconut…it’s an all-important crop to the villagers on Motunui! Of course, when it came to creating a Moana cupcake, the Disney bakers and chefs had to incorporate this tropical flavor! Instagram user @pixiedustedfun stopped by Disney’s Polynesian Village and Resort to pick up a tasty dessert and shared some photos and a review with us. Grab a fork and let’s dig in!

Vanilla and coconut merge in a new cupcake offering at Walt Disney World. The voyager inspired cupcake features not only Moana in a white chocolate piece but also the heart of Te Fiti poised in the center. Shimmering blue frosting edges the cake in a wave pattern, while shredded and sweetened coconut takes on the guise of a sandy beach in the center.

The Instagram caption reads, “Vanilla Coconut Moana Cupcake ???? This cupcake is delicious! It’s a vanilla cupcake with coconut filling. Yum! Located in the Polynesian Resort at Capt. Cooks????” This means we may be able to anticipate the coconut shreds on top to give way to either a coconut buttercream or possibly the same top center core all the way down. Combined with vanilla, this is a tropical break in your mouth!

Here’s the back of the Moana cupcake, as seen in @pixiedustedfun’s video. While simple, the blue wave frosting continues all the way around. Delicious!

Moana-themed rooms are coming to Walt Disney World Resort, exclusively at Disney’s Polynesian Village Resort. According to an Orlando Sentinel report regarding the upcoming closure in order for refurbishment to proceed, a Disney spokesperson said that:

…changes to the rooms will include a move to a Pacific Ocean-inspired color palette as well as details, patterns and textures from Disney’s “Moana,” an animated film that takes place on the Polynesian island of Motunui.

There has not yet been word as to how many Resort hotel rooms will feature the new Moana scheme, or which buildings they will be in. While we wait for construction to begin or even a reveal of concept art, we can look forward to the Moana walk-through attraction coming to EPCOT. According to a new limited-edition attraction poster now available online on shopDisney, the Moana attraction, called Journey of Water, should open at EPCOT in 2021. The product description reads:

Celebrate the new aquatic adventure at the reimagined Epcot with this limited edition print promoting the forthcoming Moana-inspired Journey of Water walkthrough maze. Featuring the goddess Te Fiti from the 2016 movie, the poster is printed on archival paper and will wet your appetite for the attraction’s 2021 opening at Walt Disney World.

Leave us a comment about the new Moana cupcake!

Comments Off on Consider the Coconut: Moana Cupcake Sails into WDW!