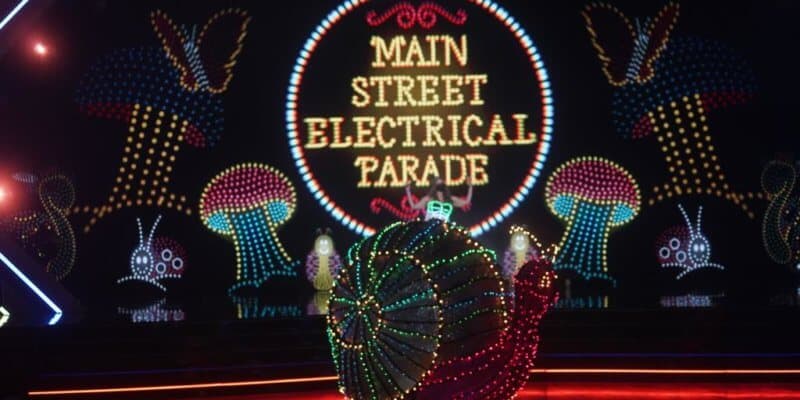 Lace-up your tap shoes… it’s Disney Night on Dancing with the Stars! Tonight at 8pm EST, ABC will air it’s Disney episode of Dancing With The Stars. And it looks like we’re in for more than just summer blockbusters or golden-age Disney animation flicks… it’s the Main Street Electrical Parade!

The Main Street Electrical Parade on Dancing With The Stars

#DWTS’s Twitter feed gave us the sneak peek today, announcing, “Tonight’s #DisneyNight is going to be ELECTRIC! Here’s a sneak peek of The Disney Theme Parks’ Main Electrical Parade, making a #DWTS entrance at 8|7c on ABC.” The photo that was shared with the tweet was of our favorite light up snail on the main stage!

Tonight’s #DisneyNight is going to be ELECTRIC!⚡️? Here’s a sneak peak of The Disney Theme Parks’ Main Electrical Parade, making a #DWTS entrance at 8|7c on ABC. @DisneyParks pic.twitter.com/45iETBJkRh

The trailer for tonight’s show was certainly spectacular, with a number in front of Sleeping Beauty castle behind the gates of Disneyland Park, as well as plenty of Disney puns brought on by new television host, Tyra Banks. Peep the trailer below that’s sure to get you excited for the upcoming action!

It’s DISNEY NIGHT on Dancing with the Stars tonight at 8|7c on ABC! Don’t miss dreams coming true in the ballroom. ? #DWTS pic.twitter.com/b5DCkDFSWR

For more Disney Parks music, you can check out one of our favorite streaming services, D Park Radio, coming straight through Google Home, Alexa or your smartphone app. It’s got not only Disney music in general but background loops from all over the world as well as seasonal channels to get you into the holiday spirit.  Will you be tuning in tonight to see what Disney songs are laced into the dance numbers?

Leave us a comment below about what song you hope to hear streaming into your living room!