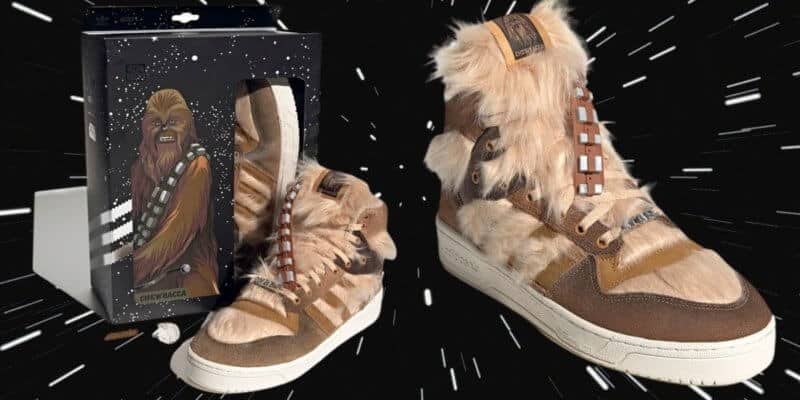 Attention Star Wars fans! You’re going to want to grab a pair of the brand new sneakers Adidas just launched because they are out of this world.

From a galaxy far, far away, Adidas has brought Star Wars fans brand new kicks themed off of one of the series’ most iconic characters. That’s right — Adidas is launching new Chewbacca themed sneakers but they aren’t ordinary shoes because this pair is actually covered in fur!

The official description on the Adidas website at this time reads:

“RROOAARRGGHH!” is one of his most famous lines on “The Empire Strikes Back”. This redesign of the classic Rivalry Hi is made to honour the 7’5” loyal Wookiee: Chewbacca. ​​What feels like strands of Chewie’s hair sit on the upper of this Rivalry Hi, making this fan-favourite Star Wars character somewhat more tangible. A piece on the tongue of the shoe gives a nod to the belt he wore on the “The Empire Strikes Back”. The sockliner has a print featuring him on it. The special packaging includes dedicated lace jewels and a poster. All to celebrate the 40th Star Wars anniversary of Episode V. ​​A clear choice to represent Chewie, the Rivalry silhouette was first created for the basketball courts in the ’80s before being adopted by the skateboarding, punk, and BMX scenes then eventually becoming the streetwear icon it is today.

Will you be purchasing these new Chewbacca Adidas once they become available in October? Let us know in the comments below.