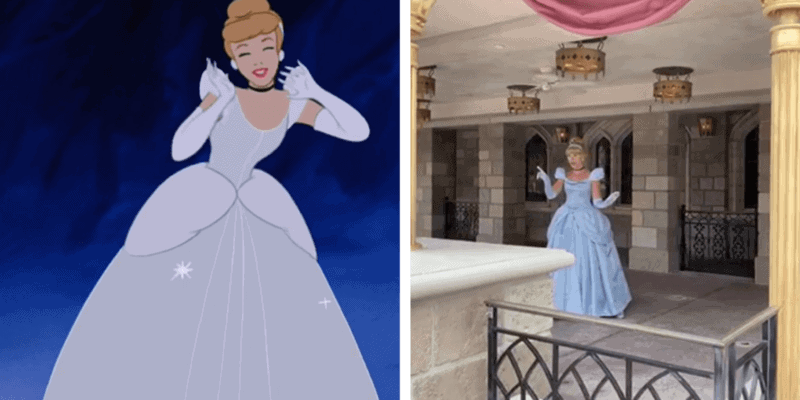 Guests at Walt Disney World Resort’s Magic Kingdom park got a surprise today if they happened to be passing by Princess Fairytale Hall at the right moment.

“This is new (to me, at least). Cinderella is doing a socially-distant meet-and-greet at Princess Hall. #MagicKingdom”

This is new (to me, at least). Cinderella is doing a socially-distant meet-and-greet at Princess Hall. #MagicKingdom pic.twitter.com/F1JWNBo6P9

This is a major turn of events in regard to Disney World character interactions lately. Walt Disney Company officials temporarily suspended all meet-and-greet experiences during the Florida Disney Resort’s phased reopening process, which began in July.

Instead of the usual meet-and-greets, characters have been visible via cavalcades (similar to parades, but often without set times) and waving from various locations, including the Magic Kingdom train station, where the Disney Princesses can often be found right now.

Tokyo Disney Resort, which has entered Phase 2 of its phased reopening, recently added some new character greetings to its daily schedule. These include the Woodchuck Greeting Trail with Donald and Mickey’s House in Toontown with Mickey Mouse.

If Walt Disney World Resort does begin offering more socially distanced character meetings soon, rules like these are likely to apply. It is important to remember that Disney has not yet officially announced any changes to the current Disney character meet-and-greet schedule at Disney World.

What do you think about Cinderella’s social distancing appearance at Princess Fairytale Hall?