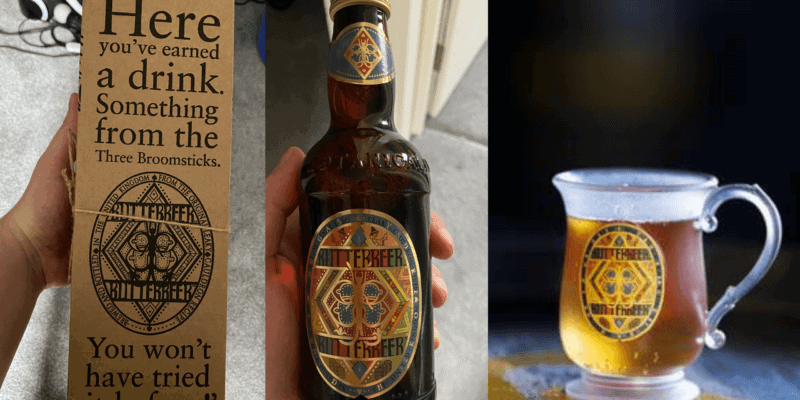 When we first announced that Butterbeer was being released in bottle form we were incredibly excited to get our hands on it. To get a taste of the famous drink from Harry Potter at home while reading one of the books is an incredible thought.

Unfortunately, it’s almost impossible to get your hands on a bottle unless you’re in the UK. This is currently the only location that Butterbeer is being sold in a bottle (for now).

Lucky for you readers that we have a few ITM writers in the UK and we are among the first in the world to get our hands on this new form of Butterbeer.

Before we get into the taste of the drink, can we just spend a minute to talk about how incredible the packaging is:

We absolutely love the Three Broomsticks theming on the packaging and it was a pleasant surprise to see the bottle packaged in something that had a Harry Potter theme to it.

Now, onto the Butterbeer itself:

The bottle itself looks like something you’d expect to see in the Wizarding World and some of you will be very pleased to know that the drink is both gluten-free and vegan-friendly. This means that there are many more people that can enjoy this butterscotch flavor sparkling soft drink.

So, how does the drink compare to the Butterbeer you can find in the Wizarding World of Harry Potter in Universal Orlando, Hollywood, and Japan?

The good news, it is the best you’re going to get without actually going to Diagon Alley or Hogsmeade, with the only real difference in the taste being that it lacked the cream you can get in the park!

The lack of cream does result in getting an overwhelming blast of butterscotch when you taste the fizzy drink. For those of you that have had Angel Delight, it tastes like the butterscotch version of that but in drinkable form.

It’s by no means a bad thing and it does taste very similar to the theme park version but we’d recommend splitting the bottle with a friend or family member, it’s a very sweet tasting drink. There’s no way we’d recommend drinking an entire bottle in one sitting, it is honestly one of the sweetest drinks we’ve ever had.

All that being said, if you like butterscotch, this is a must purchase.

It’s great that we can get a taste of the theme parks here in the UK during a time where traveling to Orlando, Hollywood or Japan is pretty much impossible. We will, of course, let you know as soon as we hear anything about the butterscotch beer making its way into the US in bottle form!

Let us know in the comments below if you have tried the bottled Butterbeer!

Comments Off on Honest Review: First Taste of the New Bottled Butterbeer