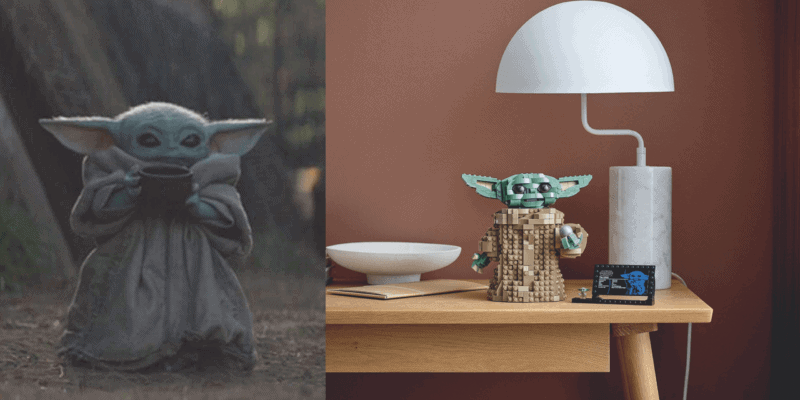 Good news for fans of The Mandalorian (who isn’t?) as LEGO has finally revealed the much-rumored Baby Yoda set is coming very soon. Take a first look at the new set below:

The new set was formally introduced to us by LEGO on Twitter earlier today:

So, what do we know about our little green friend in LEGO form? Well, while the price is yet to be revealed, we know that the figure measures just under 20cm and that it will contain 1,073 pieces. The other huge positive here is that you are able to change some of the features of ‘The Child‘ in the final build.

The figure comes with a posable head, moveable ears and adjustable mouth, allowing for many of the famous expressions from The Mandalorian to be showcased.

Thanks to Jedi News, we have information from Michael Lee Stockwell, a design manager at LEGO had this to say on the translation from screen to brick:

When I received the challenge to create a LEGO brick-built version of the Child, I knew that I had to get it just right. The goal was to capture the charm, and above all, the cuteness of the character, so we worked meticulously, choosing and placing each and every brick. We even included authentic details like the gearstick knob – a favourite toy of the Child as seen in the series.

The set also comes with a plaque that gives us a bit more of an insight into ‘The Child’:

As you can see, while we are still yet to find out the homeworld and species of the character, the age and height have been reconfirmed to us with this set. We expect to find out more on the origins of the species of both ‘The Child’ and Yoda during the events of season 2 of The Mandalorian.

The set will be released on October 30th, the same day that the first episode of season 2 of The Mandalorian arrives onto Disney+.

Will you be purchasing this new Baby Yoda LEGO set? Let us know in the comments below!