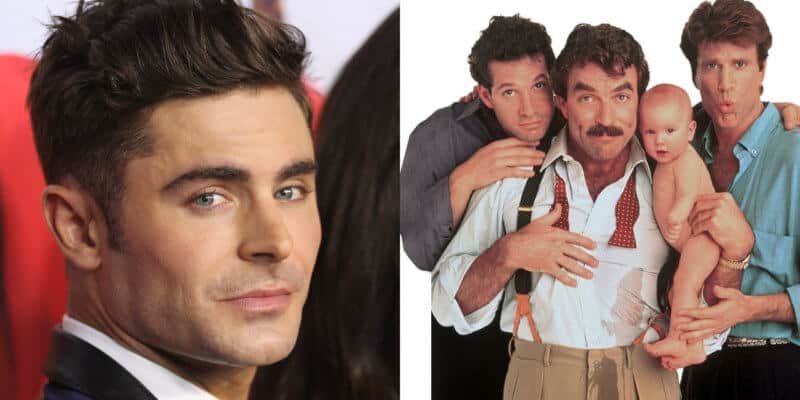 According to a new report by The Hollywood Reporter, it seems High School Musical star Zac Efron will be starring in a Three Men and a Baby reboot set to premiere exclusively on The Walt Disney Company’s streaming service Disney+.

The same report reveals Gordon Gray, known for his collaboration with Ben Affleck on The Way Back, is set to be producing the remake of the classic 1987 film originally released under Touchstone Pictures, a Disney film company. The film’s script is set to be penned by Will Reichel.

For those who don’t remember this beloved live-action film, Three Men and a Baby originally starred Tom Selleck (Peter), Ted Danson (Jack), and Steve Guttenberg (Michael)–who played three bachelors who share an apartment in Manhattan. After Jack goes filming a movie in Turkey his two flatmates find his baby daughter — which Jack doesn’t know about — left outside their door. The two are left to look after the baby and realize how difficult this task can be. The film then follows how the baby changes the three single men’s loose and fast lifestyles.

Upon its premiere, the film was a massive success for Disney, being the first live-action film to gross over 100 million at the domestic box office for the company. The film did so well, Disney made a sequel three years later titled Three Men and a Little Lady.

At this time, it is not known when the film is set to premiere on the streaming service. Hollywood film and TV productions only recently began returning to sets as we recently learned for Marvel Studios’ upcoming TV shows The Falcon and Winter Soldier, Loki, and Hawkeye. This was all in addition to the news that Marvel Studios and Sony Pictures’ unnamed Spider-Man 3 would also be returning to production as well.

What are your thoughts on Disney making a Three Men and a Baby remake that will premiere exclusively on its streaming service Disney+? Let us know in the comments!