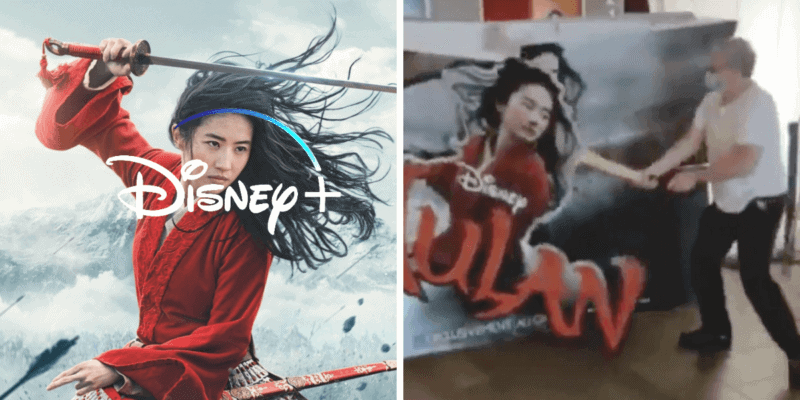 The Walt Disney Company announced that it would forgo a cinematic release for its latest live-action remake, Mulan, and it is clear theater owners are not happy.

Well, at least one theater owner.

Upon hearing the news that Mulan will be released on Disney’s direct-to-consumer streaming service Disney+ for an upcharge (similar to what one would spend to see it in theaters) one theater owner decided to demolish his massive advertisement for the film out of protest.

Gerard Lemoine, owner of the indie venue, Cinepal, in the Paris suburb Palaiseau, shared the video to Twitter with the caption which translates to “The reaction of an operator following Disney’s decision.”

While Lemoine’s reaction can appear slightly dramatic, it is very much rooted in real frustration.

“It’s really a huge effort to stay open right now for most of us, but we were assuming there would be some ambitious movie releases in the coming weeks,” he said in an interview. “By losing Mulan, we lost the possibility of offering our audiences a long-awaited film that would have helped us after these past hard weeks. It is also a bad message to send to the public [who had been expecting a theatrical release].”

Lemoine went on to say Disney’s decision is “very hard and devastating.” Mulan was one of the most anticipated blockbuster films expected to be released this year along with Christopher Nolan’s Tenet from Warner Bros.

“We thank Warner a lot for releasing Tenet in late August,” he continued. “But it’s not enough. Studios need to understand that if they cancel these films or put them on platforms, I won’t be able to last very long. I have devoted my life to showing movies and I don’t want to die!”

Lemoine is not alone in his outrage. Across the English Channel, U.K. cinema owners are also upset by Disney’s decision to release Mulan on Disney+.

Phil Clapp, head of the UK Cinema Association, shared his perspective with Deadline:

“While no one underestimates the challenges facing studio colleagues, at a time when many operators are showing faith in our business by investing in the safeguards necessary to re-open, we need the major studios – and film distributors in general – to do the same.

“First and foremost, it will deprive hundreds of thousands of cinema-goers of the chance to see such an impressive film in the best possible environment, the cinema theatre.

“‘With cinemas across the UK now continuing to re-open and welcome back their customers, the decision by Disney yesterday to put Mulan on their Disney+ service and not into cinemas will be seen by many as hugely disappointing and mistimed.

“While there may be continued issues in parts of the U.S. with the re-opening of cinemas, in other markets around the world, including the UK, cinemas are open and ready both for new films and the audiences that want to watch them.”

Recently, we shared a story about movie theaters in America beginning to beg studios to release their blockbusters.

“We need their movies,” said John Fithian, president and chief executive of National Association of Theater Owners, WESH reported. “Distributors who want to play movies theatrically, they can’t wait until 100% of markets are allowed open because that’s not going to happen until there’s a vaccine widely available in the world.”

In America, it can be easy to think of only the big movie theater companies like AMC–which almost banned Universal’s movies after the digital release of Trolls: World Tour–but these two stories from France and England reinforce the fact that individual, small-business owners all over the world are affected by these decisions.

Mulan is scheduled to be made available on Disney+ for an extra charge starting September 4, 2020.