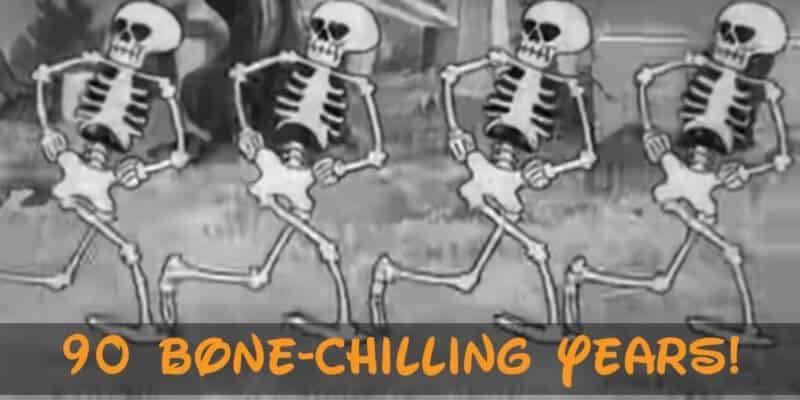 Can you believe it is almost the spooky season? Everyone is anxiously awaiting for the cool crisp autumn season, including the spooktacular holiday — Halloween! And one of my favorite traditions in preparing for Halloween is by watching classic Halloween cartoons and movies. However, there is one cartoon, in particular, that is a must-see every fall season.

Watching the popular Silly Symphonies cartoon, The Skeleton Dance is a tradition in my household every single year around this time, but can you believe they made their debut 90 years ago?!

The very first Silly Symphony cartoon danced onto television screens all around the country and the famous skeletons made children and adults smile ear to ear. According to D23, The Skeleton Dance was directed by Walt Disney himself and “the whimsical, macabre cartoon of four spook-tacular skeletons humerus-ly dancing and rattling along throughout the night kicked off the 10 year-long Silly Symphonies series.”

You can celebrate the 90 bone-chilling years with Silly Symphonies by rewatching the classic cartoon below. Walt Disney Animations describes the Silly Symphonies cartoon, The Skeleton Dance, as:

As we hear the chimes at midnight and bats flutter from a belfry; as a hound howls at the full moon and black cats brawl on the tombstones; Through the gloom, white skeletons pass, Running and leaping in their shrouds!

If you aren’t familiar with the Silly Symphonies, it was a series of animated short films produced by Walt Disney Productions. From 1929 to 1939, the series included 75 different cartoons with a variety of non-recurring characters.

According to the Disney Fandom, “Over its ten year run, Silly Symphonies would go on to win Disney seven Academy Awards for Best Animated Short Film (eventually tying with Joe Barbara and Bill Hanna’s Tom and Jerry‘s record for most Oscar wins for a series in the category) and spawned numerous imitators, some of which (such as Warner Bros’ Merrie Melodies) would go on to be major competitors with Disney.”

Have you ever seen the first Silly Symphonies cartoon, The Skeleton Dance? Can you believe its been 90 years since it made its debut? Let us know in the comments below.

Comments Off on ‘The Skeleton Dance’ Celebrates 90 Bone-Chilling Years