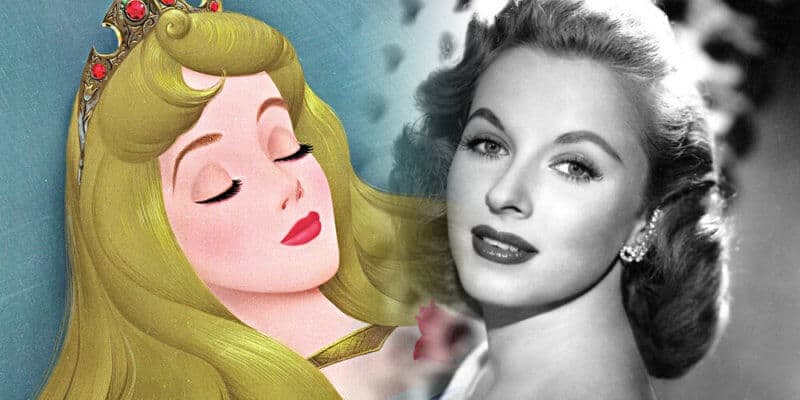 Mary Costa was only 22 years old when she lent her voice to Princess Aurora (a.k.a. Sleeping Beauty) in the iconic Sleeping Beauty film. An operatic soprano, Costa was called personally by Walt to let her know she had landed the audition. What followed was a lifetime of admiration by Disney fans young, old, and new as she walked gracefully as the Disney Princess she was. Now, following her 90th birthday, Sleeping Beauty actress Mary Costa is asking fans to finally let her rest from the role.

A Letter from Mary Costa, the Sleeping Beauty Actress

This is not the first time Costa has reached out to her fans. In 2016, Mary Costa penned a letter through her agents, MC Artist Management, asking fans to stop sending her requests through the mail, as it was more than she could regularly handle herself. The letter was kind, yet regretful that she would only be able to pen her signature at events and in limited quantities. Now, only a few years later, Costa writes another heartfelt letter to fans letting them know she will not respond to fan mail regarding her movie character at all after August 20, 2020.

Costa suggests that the recent stay-at-home has ultra-dedicated fans watching more movies and wanting to write their idols at home. But alas, her age and speed mean that fan mail will now go unanswered, and items sent to be autographed will be donated to charity. Hopefully, fans will finally let Disney’s Sleeping Beauty have her moment of earned rest. Below is the full text of her letter, appearing in an image form.

From My Heart; An open letter from Mary Costa

I would like to begin this letter to you by saying how much I have loved communicating with each of you who have reached out to me throughout my career. You have sent such touching letters and notes, expressing your thoughts and uniquely heartfelt ways. I have always enjoyed signing as many of your requests as possible and I am grateful for the love you have expressed in each and every letter I received.

It is because of your unwavering loyalty and kindness that what I need to convey to you in this letter is so difficult. Through God’s grace, I celebrated my 90th birthday this past spring. Concurrent to that milestone, I began receiving an exponential amount of mail from fans all over the world, possibly due to the fact that so many found themselves staying at home during the international Health crisis. The amount of mail I have received is more than I would ever possibly be able to answer, and trying to respond to even a portion of this amount of male would take over a year for one person to accomplish.

Therefore, although it saddens me to take this next step, it is absolutely necessary to tell you That as of August 20th 2020, I will no longer be answering any fan mail. Receiving your letters and cards has meant the world to me, but I am not able to keep up with the amount of Correspondence I am now, and have been, receiving. I am so sorry to disappoint those of you who have sent letters and are waiting for a response. My love and connection to each of my fans will remain in my heart, but I realized it at this point in my life, this is a necessary step for me to take. I will deeply appreciate your kind understanding and supportive my decision.

With much love always from your Princess Aurora, Mary 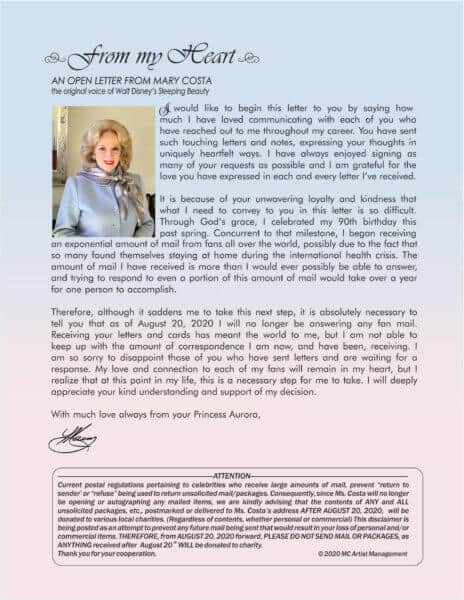 Mary Costa is a Knoxville resident, who always said that no matter how many times she worked in or visited Los Angeles, that she would always come back “home.” Retiring from acting and singing at age 70, Costa thereafter gave motivational talks and served in promotional appearances, most recently for the film’s 50th anniversary. Fans still looking for an autograph by the Sleeping Beauty actress may find a wealth of items on eBay at a variety of prices. The film continues to inspire artists, collectors, and even bakers decades after its debut.

Do you love Sleeping Beauty, or keep up with the actress that voiced them? Leave us a comment below!