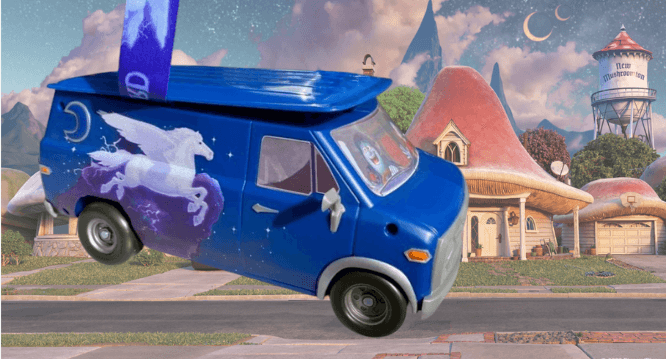 Visual influencer @Disneyandthedude shared a slew of photos on Instagram this week of the newest popcorn bucket on the block. The Guinevere van from Onward drove up in style to Disney’s Hollywood Studios and dropped it’s rock n roll glory at the popcorn stands. It’s been a while since we’ve seen a specialty popcorn bucket hit the parks!

The greatest news was that the headlights LIGHT UP. For a mere $18, you can get the large van with battery-operated headlights and a long Onward strap featuring the unicorn icon.  “We finally get a NEW POPCORN BUCKET! and… It’s Onward!! Yessssss! This popped up today over at Hollywood Studios in the popcorn carts. It’s refillable and it LIGHTS UP! $18” is @Disneyandthedude’s caption.

Find the Guinevere popcorn bucket at many of the popcorn stands in the theme park, especially those in the plaza area of Grauman’s Chinese Theatre. You’ll see it displayed in the windows like this little number.

When you pick up the bucket, you’ll see how roomy it is inside. There’ plenty of room for several scoops of buttery popcorn but also to tuck in the internally mounted shoulder strap to display the van at home. It would make a VERY fun crossbody bag for an Onward Disneybound, too!

Here, you can see the front grill of the Onward Guinevere popcorn bucket, and the grill ornament that serves as the illumination button. It controls the lights so you can save your magic for the rest of your spells instead of lighting up the night.

If that wasn’t enough, WAIT THERE’S MORE! The wheels on the van actually work and roll, so once you’ve rinsed the movie butter flavor from the inside, you can use the van as a toy. Think about all the fun you can have playing with the Onward toys and the matching van!

Instagram user @disneyworldandlandtraveler shared this photo with us of the Guinevere popcorn bucket, staged in Disney’s Hollywood Studios. You can feel the Rock n Roll music oozing from Guinevere’s speakers. “There are Onward popcorn buckets at Hollywood studios. Make sure to grab one.” is the caption they leave us with.

While Guinevere has been an everlasting image from Onward, it’s also been quite the kerfuffle. The artist that lent her van to PIXAR artists to study ended up suing the company for copying her artwork and using it in the film, and clearly, in merchandise. Do you think her van is too similar to Guinevere?

Let us know what specialty popcorn buckets you have, and if you’ll be collecting this one!