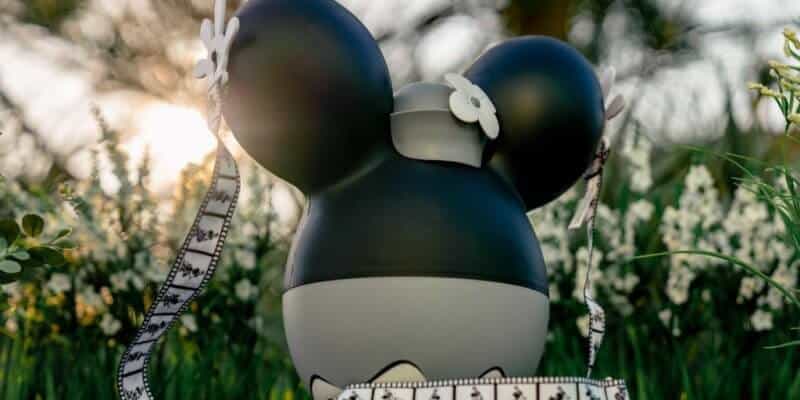 Classic Animation and Theme Parks tastes are about to collide! In just about one week, you can line up at select popcorn cart locations throughout Disneyland Park and Disney California Adventure Park to collect the newest popcorn bucket modeled after Minnie! The Minnie Steamboat Willie Popcorn Bucket was spotted on this tweet that popped up today.  We nearly salivated at the salty kernel of news:

The countdown has begun! In just 6 days, be sure to pick up this Annual Passholder popcorn bucket inspired by our very own fashionista, Minnie Mouse! (Valid AP required. Purchase limits may apply.) https://t.co/0oDbyjeLm5 pic.twitter.com/yYcKB4pICW

The Disneyland Annual Passholder page announced that, “Tasty things happen when a classic snack teams up with a classic character! Starting on Thursday, February 6, 2020, Disneyland Annual Passholders will be able to purchase a popcorn bucket inspired by the beloved 1928 cartoon short, Steamboat Willie (while supplies last)—and get refills for only $1.50 each through March 29, 2020.”

Did you see that? Beautiful $1.50 refills, which is a great deal for Annual Passholders! If only week-long Parks Guests could snag this deal, too! Minnie’s iconic look blossoms in black and white monochrome, complete with a film strip shoulder strap. Read more below to see how you can find your afternoon snack.

Starting February 6, 2020, stop by popcorn cart locations throughout Disneyland Park and Disney California Adventure Park to buy a refillable Steamboat Minnie popcorn bucket. The price will be $20, and only while supplies last. When you’ve polished off your snack, you can bring your bucket to a certified (participating) refill station and get another batch of popcorn for only $1.50. Eat your fill until March 29, 2020, when the popcorn refill magic expires. Disneyland reminds us that “this $1.50 refill offer is only good for applicable refillable popcorn buckets purchased as part of this promotion.”

Disneyland Annual Passholders have a few restrictions depending on their passes, so before you plan a trip to purchase a Minnie Steamboat Willie Popcorn bucket, check your Disney Passport for blackout dates and remember to bring your photo ID.  Disney Parks Popcorn buckets are nonrefundable, so make sure you have display room at home before adding to your collection.

Thank goodness that it’s only one bucket per purchase per Annual Passholder so there’s enough for everyone. No one likes an eBay pirate hogging up Minnie Mouse. You will not find refills at specialty popcorn locations like Kat Saka’s, the Cozy Cone Motel or Downtown Disney, so know before you go. Those tasty caramel and flavored popcorns aren’t eligible, dangit!

Where to Pickup Your Disney Steamboat Willie Popcorn Bucket

While you may not find a Minnie Steamboat Willie Popcorn Bucket at Downtown Disney or Walt Disney World Resort (here’s hoping…), you will find the buckets and refill stations in both of the main parks at Disneyland Resort. Steamboat Willie Mickey was sold in Magic Kingdom on the East Coast in the summer of 2019, but there’s no word if Minnie will travel east! Read below for the fine print of where to stop off for your Minnie Steamboat Willie Popcorn Bucket. Not all popcorn cars have buckets, and not all carts offer refills!

Only Buckets for a Limited Time

Only Buckets for a Limited Time