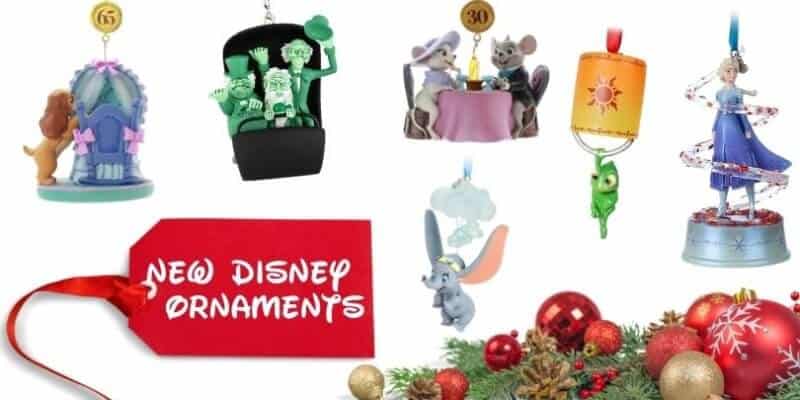 As summer starts to turn into fall, people start to think about the future holiday celebrations ahead. That is why back in July, shopDisney released the first batch of Disney Christmas tree ornaments. After all, why not have some Christmas spirit in July, right?! Now, shopDisney has put out some more ornaments featuring some of our favorite characters.

The interesting thing about this batch of Disney Christmas ornaments is that there are a lot of anniversary celebration ornaments. 2020 has marked a important year for Disney, full of anniversaries from stories that we all love like Cinderella, Lady and the Tramp, Pinocchio, Pocahontas, Aristocats, Fantasia, etc.

Currently, there are 20 ornaments marked as ‘new’ on shopDisney’s website, and seven out of those are anniversary special ornaments.

Here is a look at some of the new Christmas ornaments.

The 70th anniversary Cinderella Christmas ornament is being sold for $24.99, and you can buy it here.

This cute flying Dumbo ornament is being sold for $19.99.

Lady and the Trump – 65th Anniversary

The pawesome anniversary ornament is $24.99 on shopDisney.

The Disneyland Micke and Minnie ornament is being sold for $24.99.

And for those Halloween and Christmas lovers, there are two ornaments that might strike your heart, or your mortal soul.

Yes, this ornament glows in the dark! The Hitchhiking Ghost Haunted Mansion ornament is going for $21.99 at shopDisney.

Jack Skellington as Sandy Claws – The Nightmare Before Christmas

There are several other ornaments from Disney movies and characters like:

You can take a look at all those other ornaments here. So, why not bring some Disney magic to your holiday season this year?

What did you think of the new Disney Christmas ornaments? Which one is your favorite? Let us know in the comments below.

Comments Off on Prepare For Christmas With New Disney Tree Ornaments