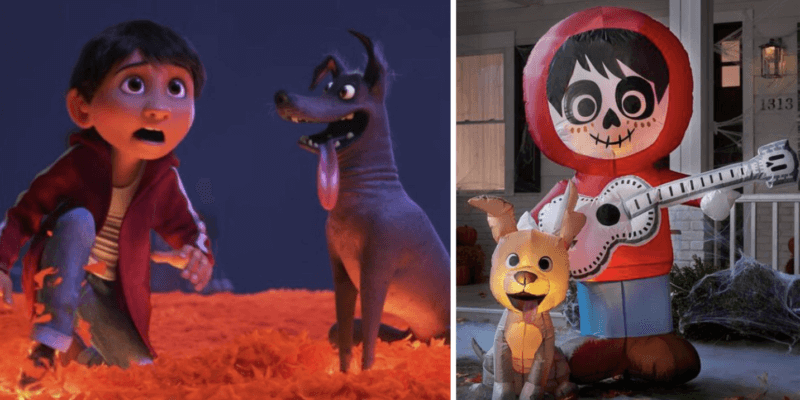 Miguel and Dante from Disney’s Coco are ready to greet your guests in this special Halloween scene. These Airblown characters are perfect as standalones or combined with other Airblown Inflatables to create a custom look for the spooky season. It comes with everything needed for easy outdoor setup and is also perfect as an indoor Halloween decoration for parties and celebrations. For outdoors, just plug it in, stake it down and watch the magic unfold.

Whether you want to use your new Coco inflatable outside for the Halloween season or indoors to decorate a Pixar themed playroom or kids’ bedroom, you will want to make sure you have an outlet available and use all of the necessary accessories.

A stake, stand, and tethers are included with the blow-up Miguel and Dante figures for outdoor use. Indoors, make sure you secure the 6-foot tall inflatable, especially if you have small children who could pull it over on themselves.

For those who are unfamiliar with the premise of Coco, the official synopsis reads:

Despite his family’s generations-old ban on music, young Miguel dreams of becoming an accomplished musician like his idol Ernesto de la Cruz. Desperate to prove his talent, Miguel finds himself in the stunning and colorful Land of the Dead. After meeting a charming trickster named Héctor, the two new friends embark on an extraordinary journey to unlock the real story behind Miguel’s family history.

The Pixar Coco inflatable can be purchased here for $129.00.  Ship to store and ship to home options are available. Are you going to buy this Land of the Dead inspired inflatable just in time to decorate your house for the spookiest season of the year?