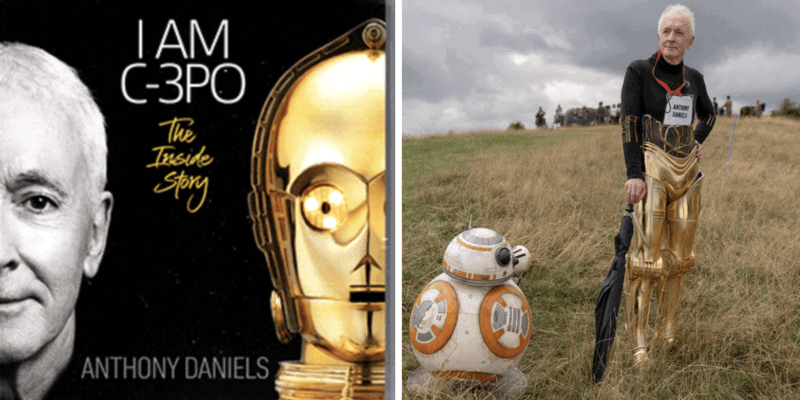 Actor Anthony Daniels has become synonymous with beloved Star Wars droid C-3PO. The star, who is the only Star Wars actor to appear in all nine Skywalker Saga movies, is now releasing a book titled I Am C-3PO – The Inside Story, with a foreword by sequel trilogy director J.J Abrams.

OfficialPix is exclusively selling signed copies of the audiobook version of I Am C-3PO. Their website reads:

Official Pix is proud to exclusively present the Audiobook version of Anthony Daniels’ new book I AM C-3PO: The Inside Story read by Anthony himself! This is a 9-disc set published by DK and limited to just 1,500 copies worldwide. No collection will be complete without it!

Currently, unsigned versions of the limited edition Star Wars audiobook can be purchased here for $39.99.

Daniels, who famously almost didn’t audition for Star Wars: Episode IV – A New Hope, recently spoke to StarWars.com about his new book venture and the website had this to say about I Am C-3PO – The Inside Story:

[it is] a love letter not only to the character that defined his career but also the evolution of moviemaking magic as witnessed through his glowing eyes. From the earliest practical effects that helped define Threepio’s geisha-like walk, a necessity to keep Daniels from falling down in the constricting costume, to finally getting a pair of gloves that can actually truly grip things in the latest film, and the experience of acting with a green screen during the prequels, it’s fascinating to see the history of Star Wars unfold from Daniels’ unique perspective.

Some of the tales have been previously aired at conventions or in his Wonder Column, once a staple in the Star Wars Insider magazine. “But then of course I talk about things that nobody’s heard me say before. Feelings that I’ve maybe not let out before,” he says. “Because as we come to the end of the whole Skywalker family saga, I have perspective on things.”

Are you looking forward to reading (or listening to!) the new Anthony Daniels book that pays tribute not only to C-3PO, but to the Star Wars franchise as a whole?